Yesterday I had an uplifting 5K race! The vibe was so positive, everyone was out exercising and many were in their charity tshirts. The weather was nice and everything was well organized. Great day!

I had hoped and planned to run the half marathon, but I had a few setbacks during training. I had a cold for 4 weeks, and then I got plantar fasciitis. I was initially determined to at least walk the HM, but a couple weeks ago it became obvious that I had to drop to the 5K because my feet were in too much distress.

I raised more than $1000 for my charity, the Toronto Vegetarian Association! Not sure I can get that much every year, but I'll try! I've been getting around $600 the previous 3 times.

Next year, half marathon you are mine! 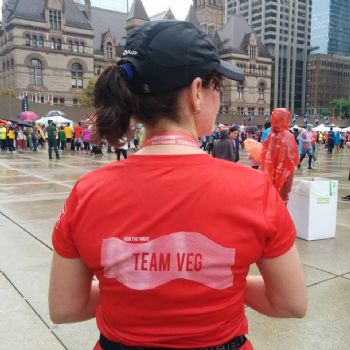