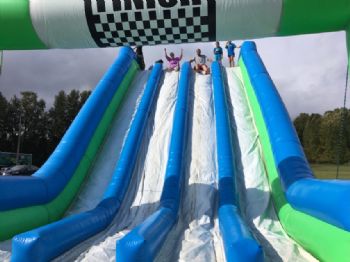 The insane inflatable 5K was this Saturday. I have been in a anxiety attack for the last week. The sent me a video link to each of the obstacles in the course about then. They looked way harder than the ones I saw in the videos I had seen online. I got there and it was even more terrifying in person. Long story short it was way harder than I dreamed it would be.

The best thing about it though was my boyfriend Dave came along to cheer me on and they let him walk the course with me. He took pictures of me at every obstacle and even helped me get on the fifth one as there was no way at that point I could have done it on my own.

My boys came back after they finished and helped me get through the last two. By then my body was well past spent but I was determined. My left knee totally gave out on me as I reached the top of the finish line obstacle and it took me several minutes before I could slide down the other side. My son Devin had to help me off but I did it. I made it through.

When it was all said and done Dave told me that there were several times he thought I would give up and quit. He never said a word just kept cheering me on and supporting me. He was very proud of me when I finished as were my sons and niece. I have to say I was pretty proud myself. I never could have done this before and frankly I probably shouldn't have yet, but I did. I was so exhausted I had trouble getting in my protein shake and was afraid I was gonna pass out. I made it though. This is one of the proudest moments of my life. Now as soon as I can move again I will start training for my next big event. I don't know yet what it will be but whatever I find I will concur it.

My race time was an hour fifty. PS. I don't know about the rest of you, but I seem to have lost my mind along with the weight. It said insane in the name and I still signed up. Shaking my head...lol.
Share This Post With Others
Report Inappropriate Blog
Member Comments About This Blog Post