My SP friend Jen asked me some good questions about my nail biting. So I am going to try and answer them here.

so here goes the thought process.

When I was young, I bit my nails because they got too long and got in my way? because it was a nervous habit? because I thought I was ugly and fat? I truly can't remember, but it was a habit I didn't break.

I bit my nails until my 20s when I managed to stop the habit for a while. I had to carry a nail file with me all the time as well as my cuticle trimmers plus nail polish was a must because my nails rip easily. I was thinner and cared more about how I looked then I guess. Actually went on dates back then instead of just hanging out with a group.

Then I slowly got back into the habit when I no longer cared so much about what I looked like. That began because I found out I had friends who only liked me when I was thin and when I gained a few pounds, they were gone. No loss but I didn't want friends because of how I looked.

turned 18 and the nail biting stopped. I spent a lot of years where I took care of my nails on and off; biting them only when I had no file and nails were catching and ripping. I mean, you can't just let ripped nails hang, those are ugly and cause damage to fabrics!

then I went through some job changes, job failures and stressful jobs. somewhere along the line I started just biting my nails again. couldn't stand to let them get too long, and once one ripped and had to be bit off, then all the rest have to be done. It is also a habit which I do without thinking about it. Stress, fingers in the mouth - I quit smoking about 7 years ago - and nails bitten. boom done, didn't want to spend money for manicures. I barely kept my hair cut on a regular basis.

Mind you, I don't go around looking like a dump every day; I just adopted the "get up, get dressed and leave the looks alone" for the day club. Don't others belong to this club?

so many other reasons could have been part of this:
taller than other kids
fatter than other kids
cross eyed
introvert
too smart kids didn't like me or maybe I scared them - hard to say 50 years later
always trying to be someone I wasn't cause others didn't like me?
and I wanted others to like me, right?
then they did like me only for all the wrong reasons.
insecure with me, my looks, who I am/was/will be
lacking confidence in myself ?
being different than everyone else and pretending to love it until I really did?

so, i know it is a nervous and stress habit, I know my nails look bad when I do it. And after reading an article telling me nail biting can make you ill, I want to stop again.

smoking used to be my instead of habit, so not a replacement option there. Nail biting is hard because you carry your fingers with you everywhere you go, when you work, drive, sleep, and it is hard to pull out a nail file to fix your nails at work - the policy says so lol

replacement ideas
have nail file around
make a fist
strumming fingers works but drives my DH crazy
get rid of stress - I retired so I lost about 500 pounds of stress there!

I could live with nails this length. And the new polish styles are endless! 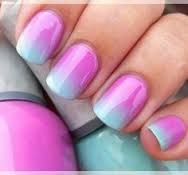