As anyone who is a member of SparkPeople knows, losing weight is one of the toughest challenges we face on a daily basis. I know it is for me. And I apologize in advance for the length of this blog, but sometimes you just need to get things off your chest.

The last year and a half have been a time of extreme change for me. My eldest sister was diagnosed with stage 4 colo-rectal cancer, with tumors in the liver and spots in the lung. Last year just after Easter she moved in with me. We lived in Athens, TN. Her doctor and chemo treatments were in Knoxville, TN, about 60 miles away. Because of the hours I worked on my job, I rarely was able to take her. She was having to drive herself, and one day she ran off the road because she fell asleep from the Benadryl they add to her medications during chemo.

I knew I had to do something. I had been wanting to get out of my job for a while. I had been there almost 16 years, but with my long hours on 3rd shift and falling asleep myself on the way home in the mornings on more than 1 occasion during the hour-long drive home from Clevleand, TN, and as stressful as the job had become, it was killing me. Literally.

I began looking for a job in Knoxville, but it was difficult with the hours I was working, so I made a bold move and quit my job. Now that was a scary situation. I did find a new job, working as a customer care representative for CVS/Caremark, and by the time the training classes began, I was out of work for 3 months. But those months were used for good.

Starting a new job after one I had been at for 16 years, I was, of course, going to be taking a pretty big pay cut, and I knew moving from my small town to a big city it would be difficult to swing rent on that pay. Once again I made a bold move that paid off. I took out my 401K. Yes, I had to pay a hefty penalty for taking it before I was old enough to, but I bought a nice, new, big mobile home. It's mine, all paid for, free and clear. I found a community where I really wanted to live. By no stretch of the imagination could it be called a trailer park, lol. We have 3 lakes, a swimming pool, a tennis court, a basketball court, a clubhouse that was modeled after Southfork from the show "Dallas," and we both had to pass a background check before we could even be considered. And best of all? It was only 7.3 miles from work. Lot rent, garbage and utilities I can handle. And it's only 6.5 miles from my sister's chemo treatments.

In March I was approved to work from home. I'm definitely saving on gas, and I'm here if my sister should happen to need something. She has had a rough spring and summer. She was hospitalized several times for C-Diff, gastritis and colitis. Her cancer markers had gone from almost 2000 to 33. The doctor couldn't believe it! But so many people have been praying for her, that we fully believe that has helped. We know there is no cure for stage 4 cancer, but she can prolong her life as long as it is a good quality of life. She had been put on a maintenance chemo, but with her stomach problems and being hospitalized, her markers went back up to 95. It definitely made her cry when that happened, but after a couple of days she made peace with knowing she would have to start back on the full rounds of chemo.

This move has been good for both of us. I'm working 1st shift now rather than 3rd shift. I'm closer to my boyfriend. My sister has gotten out of a bad situation with her sorry son and even worse daughter-in-law. We do things now. We've gone to Dollywood a couple of times. We go out to eat. I made her take an old timey photo with me. She didn't want to do it, but then she thoroughly enjoyed it, and we have the photos framed on the wall. She's even gone to see a movie with me. Life has been good, all things considered.

But with all the changes that have happened during the last year and a half, I found myself going back to my old eating habits, and regaining weight. I finally said enough was enough, knowing I had to take control back, no matter how much I ENJOYED eating whatever I wanted. I didn't enjoy the tight clothing that came with that.

In June my company switched our health insurance to United Health Care. A few weeks ago I received an email about a plan called Real Appeal that my insurance offers me for free because of my BMI. There are people from all over the country in the classes. We can't see each other, but we do see our coach, and we have chat so we can communicate with each other. So far I've had 2 sessions with the coach, and it's amazing how much having that weekly meeting has helped me. The reason I haven't been tracking my food here is because we have to do it there. And we also have to add a monthly photo to show our progress. So not only have I started eating better again, but I'm also exercising now, and my clothes are getting loose, which is something I love seeing happen.

And the Real Appeal plan gave us a whole lot of items to help us. We have our portion plate, new measuring cups and measuring spoons, a really nice digital food scale, digital scales (I gave my sister my old ones because the green ones match my bathroom), resistance bands, workout DVDs, a pedometer, an aluminum water bottle, session books, a cookbook, and what I was most excited for, a personal blender. I like smoothies, but dragging out the big blender with the heavy glass jar was a pain, so this is great for me. 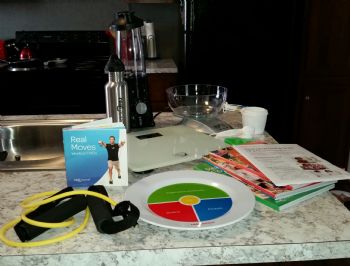