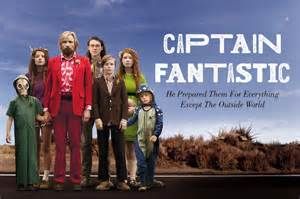 In “Captain Fantastic” Viggo Mortensen, as Ben Cash, is a shoo-in for an Oscar nomination and, possibly, winning the statute! Always an excellent actor here he is even one step better than other times. Besides holding your attention in every scene he is in, including, yes, his required full frontal nudity shot, there are two short scenes that will mesmerize you with one being the screen filled with his full face from the chin up that expresses pain, hurt and puzzlement so distinctively you won’t be able to miss what is going through his emotions. In the second scene, with his son, played by George Mackay, who should certainly get a supporting nomination, they are both so forceful in what they feel you won’t breathe until the camera moves on to the next scene.
The story is a simple one of a couple who raise their 6 kids, ranging in ages from about 5-18, in the mountains and forests of the upper Northwest away from civilization. They are taught survival, are home schooled and in the evening they read, eat, play music and talk politics, philosophy and whatever else is on their mind. The opening scene is one of the oldest son becoming a ‘man’ by killing a deer for food, which, thankfully, is over quickly.
Their mother has been away for 3 months in the hospital for a bipolar condition and they are all shocked, including dad, when his sister, Kathryn Hahn, calls to tell him that their wife/mother had committed suicide. Though his father-in-law, Frank Langella, doesn’t want him coming to the funeral he has all intentions of fulfilling his wife’s Last Will and Testament and so he piles the kids into their school bus camper and takes them into the outside world.
“Captain Fantastic” is a roller coaster ride having you gasping by the deer, or other animal, killing followed by the laughing of the youngest asking “What is sexual intercourse?” or her older brother kissing a girl for the first time and then tears streaming down your face as you realize that as much as Ben loves his kids he may be hurting them more and could lose them.
In a cast of standouts, including all the kids and Steve Zahn along with Ann Dowd, the dominating figure is Viggo Mortensen followed closely by George MacKay’s performance. Each of the kids have a chance to shine whether it is using the ‘f’ word, in a funny way, or a teenage girl discussing “Lolita” and her feelings about the old man or a boy, not knowing how to deal with death, ‘turning’ on his father.
“Captain Fantastic” just misses being an excellent film due to a bad musical soundtrack, being a few minutes too long and turning to a ‘Hollywood’ ending which wasn’t needed.
The film is rated R due to Mortensen’s full frontal nudity, language, adult themes and talk, the latter mainly by the kids dealing with mature subjects.
Years ago I said I would stop going to the movies if Charlize Theron didn’t win the Oscar for “Monster” and at this point I feel the same way about Mortensen’s performance!.
https://www.youtube.com/watc
h?v=D1kH4OMIOMc