This challenge was set in motion to get the family moving. My husband goddaughter was the one who initiated, so after hearing about it I gave her a call and inquired. They were going to do the BLC for 4 weeks. Well, I asked her, if it was okay to give my input. I suggested that BLC goes for 12 weeks and $20.00 to participate, one dollar

for every pound gained, $5.00 every other week, and $5.00, if you opt out on a weigh in. Of course, there had to be a final group challenge and that was to do a

. Well, everybody was excited and suggest that I become captain of the BLC.

The first 4 weeks was great, then we had several unexpected events; from losing both of my in- laws on the same day 20 minutes apart, two having emergency surgery. All I can say is I didn't recovery well after losing my in-laws. I still encouraged everyone to do their best.

During the final week of the weight in; I reminded everyone about the

Your Way Program, and gave it to each person, because no one other than myself even done

, and I just thought it would be a great way to end our challenge. The day of our final challenge nobody showed up. I was extremely disappointed in my family, but I got over the disappointed and did the

solo. However, everybody showed up for the Winner Reveal Cookout Celebration. In the meantime, everybody was trying to figure out who won. I told them earlier in the week; only the cake maker and I know who the winner is.

They put the right person in charge, because I was so tight lip.

The next kicker was, I didn't have the name of the winner on the cake, but the weight lost percentage. You should have seen the looks on their faces.

We had the biggest laugh, because winner was still unknown. Besides, two of the members where not present, and I didn't think it would be fair to reveal the winner without them. They finally arrived, and I revealed the chart with percentage of the winner on the cake. 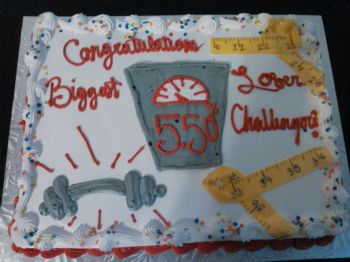 and the $522.00 they had won after our 90 Day Family and Friends Biggest Loser Challenge.

I had several other family and friends asking about the BLC, so round two starting August 1. The Winners Pot will start at $300.00. Yes, having a chance to win the money is all great and dandy, but overall it's about helping someone change their lives for the better. In hope they will continue on beyond 90 days, and adapt to a new lifestyle change, like routinely brushing your teeth.
Share This Post With Others
Report Inappropriate Blog
Member Comments About This Blog Post