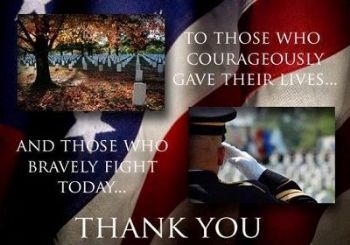 To those who gave their lives, and to those who fight today, and fought yesterday. Thank you.

Memorial Day, or Decoration Day, is a day to remember those who have died and fought in service for the United States of America.

The original Memorial Day was proclaimed on May 5, 1868, During the U.S. Civil War, by General John Logan, the commander of the Grand Army of the Republic, in his General Order No. 11. He said:

"The 30th of May, 1868, is designated for the purpose of strewing with flowers, or otherwise decorating the graves of comrades who died in defense of their country during the late rebellion, and whose bodies now lie in almost every city, village and hamlet churchyard in the land."

If you have ever known someone who fought in war, or the families of those who died in wars, you know the terrible toll for those who survived their war. They bore the scars of all those that fell around them and carry it for the rest of their lives. They, too, should be honored today, and every day, for this must be one of the highest honors bestowed, no matter the war.