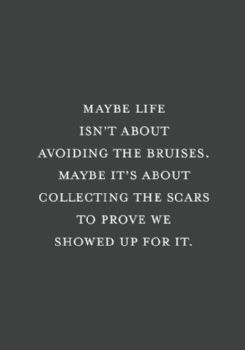 Maybe life isn't about avoiding the bruises. Maybe it's about collecting the scars to prove we showed up for it.

I have been swimming later at night, after the swim team, the kids, the people starting swimming, the seniors are all finished. I basically have the olympic pool to myself. It is serene, awesome, refreshing, and my very favorite exercise.

I got out of the pool at about 8:20 last night. The lifeguard and I were the only people in the pool area. I told her before I started swimming that I was a lifeguard, and that I probably didn't need to be watched too carefully. She smiled and kept watching (good job).

She looked down at my knees, and saw my scars, and said, what happened to you? Life, I told her. She said, you got hurt that many times? I said, no, two of these are knee replacements. The lines directly down the center of anyone's knee is indicitave of a replacement. Oh. The other one is my fracture from last year. She said, why don't you get those fixed? I thought to myself, oh to be so young and know nothing, and said, why? She told me that she wouldn't want scars on her legs.

I said, wait until you are 60, you will be grateful for them. She said, well you're not 60. I said, oh, yes I am, and I love these scars, and wear them proudly. I told her that scars were the clear indicator of winning a battle and I wouldn't do a thing to them ever. I earned every single one like they were shrapnel, and they are part of what makes me who I am.

She looked a little embarrassed and mystified, which was fine with me, and I smiled and told her to have a nice night.

My scars are the proof that I have fought and won. I earned every single one of them, and will wear them like medals.