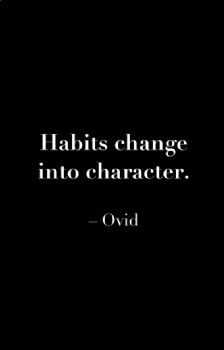 Habits change in to character.

Maxwell Maltz was a plastic surgeon in the 1950s when he began noticing a strange pattern among his patients.

Dr. Maltz discovered in the late 1950's that when he performed surgery, especially nose jobs, that it took patients about 21 days to recognize their new nose. Over time, this played out many times for him, and he realized that when he tried to form a habit, it took about the same about of time. His observation was: "These, and many other commonly observed phenomena tend to show that it requires a minimum of about 21 days for an old mental image to dissolve and a new one to jell."

In 1960, Maltz, published that quote and thoughts on behavior change in his book called "Psycho-Cybernetics". His book has sold over 30 million copies.

Since then, MANY noted "self-help" professionals, as well as writers and speakers, used this 21-day rule as the absolute as to the time it takes to form a habit. They were, and are, wrong. In a recent study published by the European Journal of Social Psychology, Phillippa Lally, a health psychology researcher at University College London, decided to figure out how long it actually takes to form a habit.

The study examined habits of 96 people over a 12-week period. Each person chose a new habit for the 12 weeks and reported each day on whether or not they did the behavior and how automatic the behavior felt.

According to the study, it takes 66 days before a new behavior becomes automatic and a new habit took between 18 and 254 days to fully form.

The reason this is important, is because this original quote from Maltz was basically mis-quoted. He said that it took AT LEAST 21 days to form a habit, and this was only his own observations. He had no study, just his reflections. We have taken his opinion and made it fact.

Forming a habit, whether it is drinking water when you get up, or sitting down when you eat, or even better, checking every single label before you buy something, is not something that is done in 21 days. It is done on each of our own timetables, and it is important that we all understand that and take the time to develop our own good habits.