My Wedding with Non-pro pictures!

So I made it! I made it through my wedding, and I am now a wife!
Some details about the whole thing! Just scroll to the pics if you do not want to read my babble! haha

I got my nails done Thursday with my Mom and Mother-in law. I ended up getting blue sparkle to match the ties! Haha. We got lunch and relaxed a bit before the rehearsal dinner. We had a small bridal party with a total of 3 people in our party. It actually made things a lot easier that way! My Aunt and Uncle were readers in the ceremony, so they were also at the dinner. We had 15 people there total. We did not do an official rehearsal because our ceremony was so short. The dinner was great! I had the pecan-crusted chicken with red pepper sauce. I only ate half because I wanted to make sure I fit in my dress! I could not wear any shapewear because the dress was too low in the back.

I dropped my dog off at the kennel Friday afternoon and then checked into our B&B room after that. It was nice getting there early so we did not have to rush around on the day of the wedding. Matt (my husband!) had a bunch of family members drive in from Buffalo, so we had dinner with them, his parents, and mine on Friday night. It was casual and really fun also! I had a hard time eating then too for some reason. I only ate half of my eggplant sandwich. We went back to the room after that and relaxed before bed - yes we slept in the same bed the night before. Sorry I am not too traditional! I had the worst night though. My nerves were killing me, and I was up most of the night with stomach cramps. Even my chest was hurting me too. I finally got a little bit of sleep and then had to wake up for breakfast! I had breakfast with Matt, my parents, and his parents Saturday morning. It was nice to see each other before we got ready for the wedding.

I was supposed to have two women do hair and makeup for 6 of us, but the one had a family emergency and cancelled. I had to start hair/makeup earlier to make sure everything got done. I was drinking a lot of pepto all morning and afternoon to help with my Stomach!

The morning flew by and the photographer came 30 minutes early! We finished up our makeup and hair and got my dress ready to put on! It had been rainy and cloudy for almost 2 weeks before the wedding. It rained that morning, and I was worried it would ruin our plan for outside photos. Somehow it did not rain and I actually put on my dress outside for photos! haha. Matt and I did a First Look and it was really cute. We did that at 3pm and then did some photos with the two of us. We did immediate family photos from 345 to 415. I took the shuttle over with my parents to the country club to make sure everything looked ok! 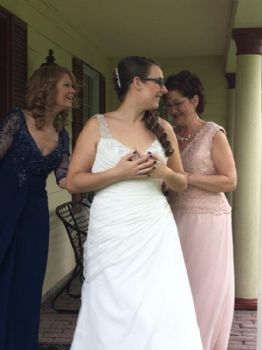 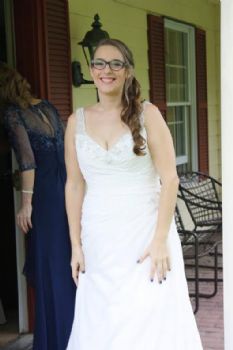 I stayed in the bridal suite from 5 until 530 when the ceremony started. We had the ceremony out on a deck, but the country club called me on Friday and told me half of the awning/cover blew off! So if it rained, we would have to get married inside. Luckily it was not raining, and we got married on the deck! It was so nice having a moment with my Father before he walked me down the aisle. We saw the reception room before we went out on the deck, and saw how beautiful everything was! We had a string duo playing outside and we could hear it a little bit. As we walked outside, the sun came out! It was amazing. We did not see the sun for so long, and it came out then! The ceremony was about 15 minutes long, and I tried so hard to not cry! I kept having to look out onto the golf greens or look at where the guests were seated instead of listening because I was starting to tear up. We said our vows and it was over so fast! We walked back down the aisle and stayed in a separate room until everyone cleared out of the ceremony area into the cocktail room. There was so much food! We took our Large-family photos and got a chance to eat some of the hot and cold appetizers. Yum! My stomach was starting to feel better so I ate some! 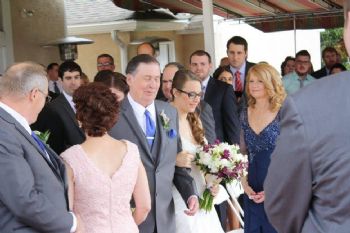 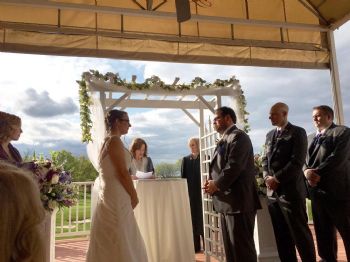 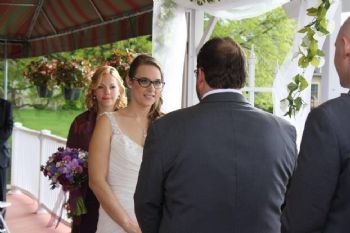 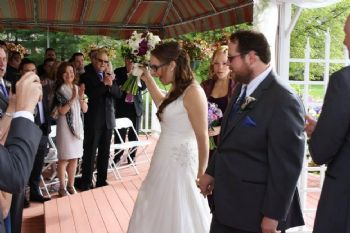 The introductions into the reception room were so fun. I surprised Matt by having the 3 bridal party members walk out to the Legend of Zelda theme. Everyone knows Matt loves that game, and he was smiling once he heard the song. I bought him a tie tack and cufflinks from the Legend of Zelda too. We did our first dance which seemed like forever! And then we had 3 speeches. All 3 were so nice. We ate our food and then I had my dance with my Father. We danced to You Raise Me Up by Josh Groban. We practiced twice before the wedding, but I was still nervous because there were a lot of moves! It was so nice and everyone complemented on how well it was. My Dad has emphysema so he had to wear his oxygen. I cried at the end of the dance and actually saw my Mom was crying too. The three of us sat together while Matt did his dance with his Step-Mom and one with his Mother. It was cute. 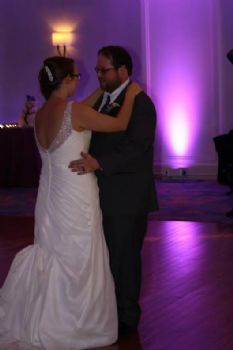 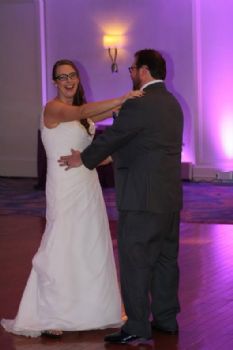 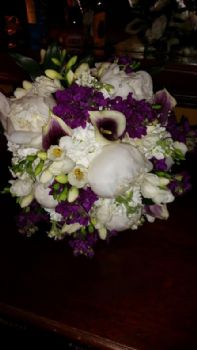 The night went by so fast! We had a buffet with Tuscan chicken, horseradish-crusted salmon, vegetable roulade and carved prime rib. I had some salmon and chicken and it was really good! We then cut the cake and I danced a lot! I did not drink too much because my stomach still was not perfect and I wanted to remember everything! We had 3 types of cake and a sweets table. 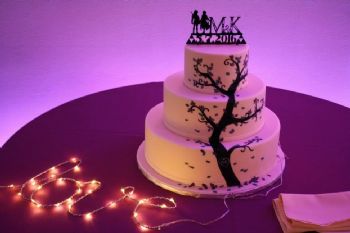 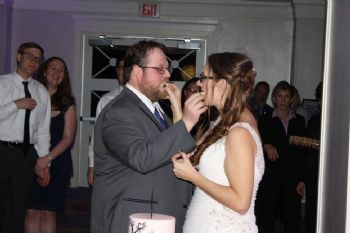 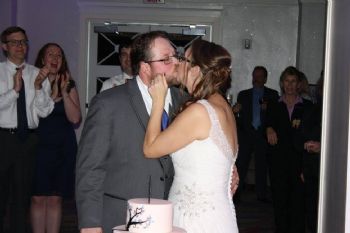 I tried so hard to talk to everyone, but it was so hard to get to talk for long! I had the best time, and everyone was saying how great it was. Woohoo! I made it! We had brunch on Sunday morning with 25 of us, and it was really nice. We talked about the wedding and celebrated Mothers Day as well! My parents were so happy and smiling the whole time. It was so nice! 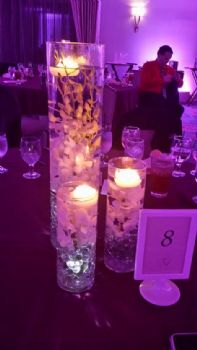 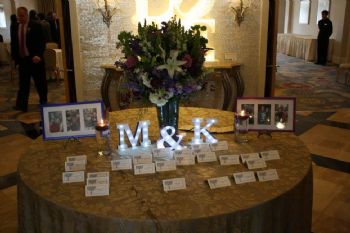 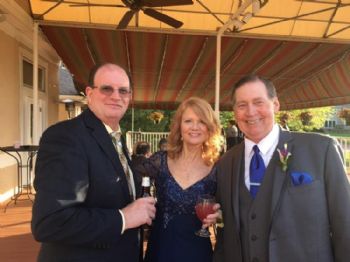 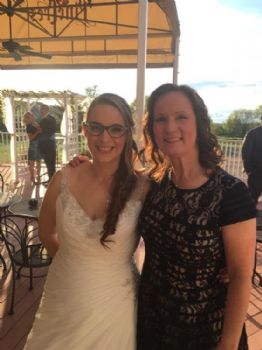 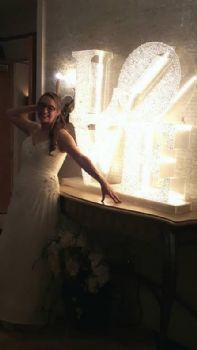 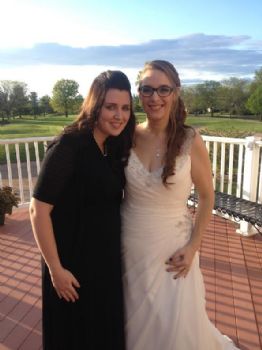 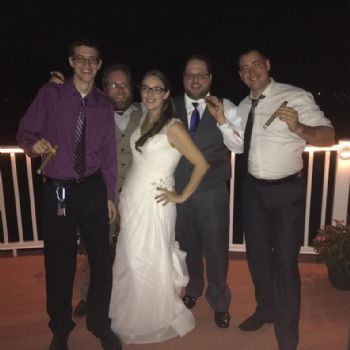