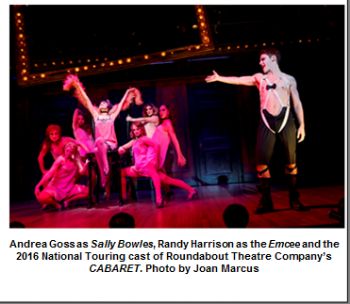 The role of Sally Bowles in the musical “Cabaret” is a difficult one for actresses. To start off with she has to be a first rate performer to appear as a third rate entertainer in a sleazy 1929 show bar in Berlin. She also has to get the audience on her side though she is basically a prostitute who will sell her body for a fur coat, a job or a place to stay. She has to be brassy, the life of the party, in the numbers she does at the Kit Kat Club but still be vulnerable enough under her façade to have a naïve American writer fall in love with her and for her to think, if only for a moment, it might work. She wants to ignore the world around her and how it is intruding into her life in spite of the facts of what she is seeing.
Andrea Goss, as Sally Bowles, in the opening night performance of the Roundabout Theatre Company touring show of “Cabaret” at the Adrienne Arsht Center in Miami presented by Bank of America in the Broadway In Miami 2015-2016 series, delivers the goods whether singing showy numbers in the Kit Kat cabaret such as “Don’t Tell Mama” and “Mein Herr” or songs that reflect how she feels in “Maybe This Time” and the title tune “Cabaret” where she lets loose with how she sees life.
In an equal demanding, and a more in your face performance, Randy Harrison as the Emcee is on stage most of the evening as either the focal point of numbers like the chilling “Tomorrow Belongs to Me” or the satirical “If You Could See Her” while breaking your heart with “I Don’t Care Much” or standing on the side as an observer. He brings a lot of sexuality to the show along with many laughs.
Quietly stealing the show as Fraulein Schneider, a landlady, and Herr Schultz, a Jewish fruit store owner, are Shannon Cochran, with a strong voice, and Mark Nelson as the heartbreaking suitor. Their duets on “Married” and “It Couldn’t Please Me More” along with her solo on “What Would You Do” are the most moving moments in this musical.
The Kit Kat Cabaret Boys, Girls and Band bring a lot of sparkle, fun and sex to the production while Lee Aaron Rosen as the American writer fighting his homosexuality, Ned Noyes as a Nazi who tries to use the writer in his cause and Alison Ewing as a Nazi sympathizer who also happens to be a prostitute add to the time in history when many people had to make decisions as to where they would go in a world becoming more frightening and, in many ways, more than a cabaret than the Kit Kat Club.
There were a few minor problems such as at times the actors using accents that made their words intelligible, a very distracting, annoying use of a disco ball and a first act that dragged a bit but all in all with music and lyrics by John Kander and Fred Ebb and direction by Rob Marshall and Sam Mendes this production shows why “Cabaret” has become a classic in the Broadway history of musicals.
“Cabaret” is playing at the Adrienne Arsht Center until April 17th and then will come to the Broward Center for the Performing Arts in Fort Lauderdale January 10-22, 2017.
“Cabaret” runs 2 hours and 42 minutes including a 20 minute intermission.