I have two pretty expensive items that I need/want and I conveniently have two short term goals for myself. I thought I'd put them together, make things happen!

Last week, I tried to upgrade my fitbit. I ordered the Alta and when it got here it would not turn on. I tried charging plugged into the computer and I tried charging it separately on a wall unit. It was DOA, apparently. Same night I tried to update my fitbit software on my computer and that was a no go. I'm sad to say, I'm still on Windows Vista. In computer years that's OLD. haha SO... I'm going to upgrade my computer AND still on the market for a new fitness tracker. I have no good reason or excuse for this.... but I've saved up the money. I've pretty much decided to not get another fitbit. Their customer service is pretty awful from the 2 occasions I've dealt with them, so I see no reason to buy another product from them. Right now I'm debating between the microsoft band 2 or the vivosmart hr.

NOW... my two goals. 1. Go thru the remaining boxes and "stuff" in the office of the new apartment. Make the room functional. This goal will honestly help when I'm switching computers, so it just made sense to make this goal correlate with getting a new computer 2. Lose 5% of my weight. This goes with my team challenge that I previously blogged about. I have 10 lbs to lose and a new fitness tracker will be my reward. Hopefully this will help put some fire under my bum to get both of these things done. 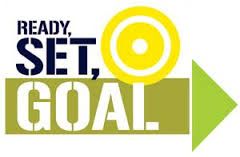