First, I want to thank all of you for your kindnesses: your emails, messages, and virtual hugs helped me more than I can ever tell you. We may never meet face-to-face, but we are truly friends.

Second, I want to publicly acknowledge my daughter Katharine. Those first weeks were horribly chaotic, and her help as the "communications hub" was invaluable. Some of you were in touch with her, so you know just how crucial her help was to me.

This is shaping up to be... a peculiar year. Beyond the emotional angst is the uncertainty. Suddenly finding myself caught between two countries (each of whom seems to want to grab a big chunk of what we saved but skip out on providing any kind of retirement income) I'm beginning to suspect I may be forced into making a choice.

Well, we do what we can, when we can, ain't? The compass needle is wavering back and forth, but I have faith that eventually it will point north.

Today is one of those dreadful anniversaries, and this is what's been running through my mind:

Some twenty years ago I worked in the call center of a major bank. The twinned concepts of "banking" plus "24 / 7 call center" were relatively new at the time, and we didn't have the restrictions and rigid job-performance directives that call centers have now.

During the traditional banking hours on Monday through Friday we were indeed busy. Often there were scarcely a few seconds between calls.

But by late afternoon and in the evenings, as well as on weekends and holidays, the calls were fewer and there was more time to have a little non-bank conversation.

Even after all these years there are some customers I still remember --a retired professor who travelled all over the world to attend operas… an elderly Greek immigrant in his 70s who travelled back to "the old country" to escort his new wife – also in her 70s - to America… the Scottish woman who sounded like Mrs Doubtfire.

One of my favorite customers was Mrs R---. The first time I happened to take her call she was checking on their retirement pensions. She had a charming, almost lilting accent, and I took a chance, doing something I very rarely did. I asked her "Parlez-vous francais, madame?"

(Now, I'm not showing off. I studied French for years, in junior high and high school and for two years at college. After all that, what do I know? I can say "Where is the bathroom?" and "Help me!" and "la plume de ma tante." I can also sing – badly – most verses of "Alouette." That’s it. Oh, and "Parlez-vous francais?")

Mrs R--- was off and running. I got little of that first conversation, but she discovered that my "baby French" was just about enough for us to engage in a bit of small talk amongst bank business.

She seldom called in more than every few weeks, but she got into the habit of asking to be transferred to me if I was on duty. I always enjoyed talking to her, and in those brief conversations I learned she was a French war bride, that her American husband had been an interpreter for the army and had been stationed in France after the liberation. Her brother was working with the Americans and had introduced them.

They married, and when she came to the United States in 1946 she spoke very little English, but by the time I knew her she had been in America for fifty years and her fluency was assured, the only giveaway that lovely accent.

They'd raised four children who were scattered all over the US and now that she and her husband were retired they travelled much of the year visiting their children and grandchildren. They had an apartment on the edge of a big city and spent their "at home" time going to the theatre and hosting dinner parties – she was so eloquent, described things so well, that even now I remember some of the places and events she talked about.

In 1998 our bank was bought by another: these "mergers" are never a marriage of equals. The big fish eats the small fish, which quickly disappears. Our department was being closed, since The Big Bank had a large state-of-the-art call center of their own in another state. We received pink slips, but in all fairness, the severance package was generous and we had nearly a year for closing down, during which time we could apply in-house for positions or job-hunt elsewhere with glowing recommendations.

I had elected to stay to the end, partly because my plans included going back to school, partly because the overtime -- as we picked up the slack for people who were leaving -- was the most money I’d ever made.

Thus I found myself manning the station on my own one Saturday evening - after all, who calls a bank on Saturday night?

As it happened, Mrs R--- did. I chirped my usual "Thank you for calling the Thus-and-So Bank. This is Kasey. What can I help you with?"

She said "Oh, Kasey, I was hoping you would be there." Then, very softly, she said "J'ai perdu mon mari." She paused, and asked "Est'ce que vous me comprenez?" - "Do you understand?"

I did understand: what she'd said is "I have lost my husband."

I am not a person who cries easily, and normally the tears I shed are eminently selfish ones. But I could feel the tears starting.

At the end of the day, I don't suppose it mattered. Her husband - who had appeared to be perfectly healthy, who'd never been ill a day in his life - had literally dropped dead of a heart attack, gone before she could even cross the room to him.

Mrs R--- said she was not going to wait the traditional year before making changes. She was clearing out their apartment, planning to sell it, then she thought she would live with her children, moving among their residences. Spending time with the children seemed to her the best option.

I spoke with her perhaps once or twice more. Not long after that conversation personal account calls were transferred to The Big Bank's call center, and we handled only commercial account calls for the remaining weeks.

I don't know, of course, whatever became of her. But she's been on my mind quite a bit these last couple of months. I can still hear her soft voice, with her beautiful French accent, saying "J'ai perdu mon mari."

I understand, more than I would ever have chosen to. 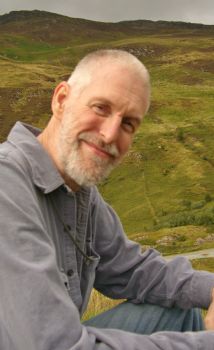