Wow, another long time since I've "escaped" rl, imagine that. Actually I've had to stay away from the computer because the Doctor doesn't want my foot swelling up from sitting there so much, so I've had to cut back on that. Still working with the playground, and we're getting a lot of local businesses behind us.

The head of the parks dept also found a business (in CA, but a distributor in IL) that makes the same type of plastic/board materials that we need for the decking and posts, for $25,000 less than what we would have been paying from the WI company.

I've got to contact the business in regards to getting a lower price (or donation) of nuts, bolts, screws, etc.

I've also been working on the agenda for Monday's meeting. Speaking of which, there was an article in the newspaper that a guy (with the same name as the head of the builder who was going to do the groundwork for free, etc) was arrested for indecency. I'm not 100% sure it's not the same guy, but that'd be a major disaster. He's the one who got the $100,000 donation for us. He was arrested for walking out on his deck naked on Halloween and (the paper says) saying "want some candy" to some trick or treaters. I hope it's not true.

Anyway, my foot/ankle: The doc has been putting a unna band on it (it's like a soft cast that goes up to just below my knee; it has calamine lotion and glycerine on it). When he first put it on a week ago Wednesday he said it'd take 4 weeks for it to heal. He removed it last Friday and was shocked that it was 50% healed already. So he put it on again and I went in Monday and he said it was 50% healed from what it was Friday. YAY!! He and the nurse hadn't seen anything like it, I've been saying lots of prayers and I really believe that's Who is doing it. Anyway, it's back on again and I go tomorrow to have it checked again. I still get pain once in a while, but nothing like it used to be. Plus it was itching on the sore yesterday, so it has to be healing.

Our Daughter and SIL has been taking care of a female dog and her 2 week old pup because the mother was brought into the clinic where our Daughter works, and had to have a c-section. She lost the other pups, but one survived, and the people gave up the animals (they wanted the pup, but the clinic said no (they had unpaid bills from the dog being brought in they couldn't pay). So our Daughter brought the dog and pup home and have been taking care of them. Now someone wants them (well 2 people who are friends; when one leaves the other takes care of her dogs) who will take good care of each of them. The one already said she was buying a vest to take the Mother kayaking, and she's talking of taking her on world trips with her. Too funny, but you know they'll be loved.

We've been working with the Janesville Generations Foundation (who gave us part of the money) and they're sending out letters to local businesses to help us raise the remaining $100,000. YAY!

I hope you all have a wonderful day and take care of yourselves. I'm supposed to be gettting a new modem, but for now my computer rarely is working well.

I'll leave you with one more pic of Nora (the mama Bengal cat) and one of her kittens.Nothing like a hug from Mama: 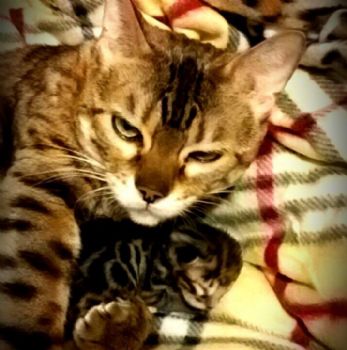