Finally the extreme cold temperature went away and we got mild winds - and all of the snow disappeared! Feel a little pity for those who loves skiing, but for myself I found it wonderful to bike with doggy this sunday! Yesterday little snow fell again, enough to make the landscape white – and to make it impossible to bike. But my time will come, I don´t care about "Normal" winter weather as long as the temeperatur does not get below -10. For the moment it is 0 (C) and I love it...

Another weird experience - saturday a friend of mine had a bid wedding party. They gott married a year ago but had not have time to throw the party until now.

I am not that keen on parties - people drink and it is often very loud music and you have to scream your way around... but this party had a theme - "magic" I think, and they needed a fortuneteller. I offered with the result that I had a "reception" in the basement. It was said to be two hours but I stayed five hours - it was sooo interesting and rewarding!

I am not psychic and can see the future for anyone... but I am an educated coach and I use the tarot cards to start a conversation. I surrounded it with a little magic stuff in choosing three cards and then tried to ask the queastions that would make the customer find his/her own true wish... it was absolutely fantastic how people gave away their hopes and dreams and revealed a lot about themselves.... the line just grew but when my candles had burned down I ended my "performance"

I looked the part too: 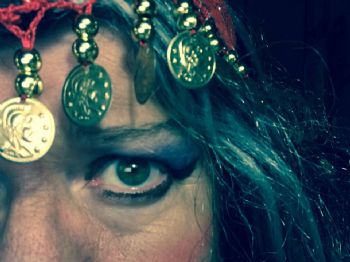