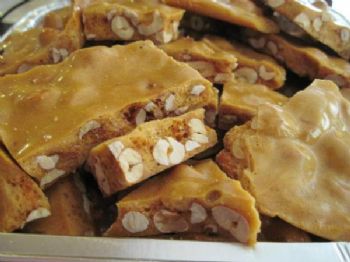 It’s National Peanut Brittle Day! Brittle was one of the first types of candy ever made. Many ancient cultures that had access to molasses, honey, or sugar, produced some form of it.

The first peanut brittle recipe appeared in an American cookbook, but the exact origin of the confection is uncertain. According to one account, peanut brittle was a Celtic dessert. The Celts covered peanuts in sugar and baked them, and this eventually evolved into a caramel bark.

Peanut brittle can be a little tricky to make. Most recipes call for a candy thermometer to allow the baker to regulate the exact temperature, and the results can be affected by weather! If brittle is made on a humid day it will not hold its shape.

DIRECTIONS
Grease two flat cookie trays with a little butter and set aside. This is where you’ll pour the brittle mixture when it’s ready.
Bring the ½ cup of water to a boil in a small sauce pan. Clip your candy thermometer to the side of the pan – this is your close friend for the entire process. If you can watch a thermometer, congratulations: You’re an award-winning brittle maker. Once the water is boiling, pour in the cup of white syrup, then the two cups of sugar. I tend to use a table knife to stir the mixture throughout the process. Boil this until it will spin a thread – “soft crack” stage, about 270 degrees. Then add the two cups of peanuts and two Tablespoons of butter. Let cook, frequently stirring, until it reaches “hard crack” (300 degrees). IMMEDIATELY add the teaspoon of vanilla and two teaspoons of baking powder. Stir vigorously with a flat wooden spoon. As the mixture froths, pour onto the two cookie trays. Let cool and harden. Break into pieces for serving.
Share This Post With Others
Report Inappropriate Blog
Member Comments About This Blog Post