Woke up later than I wanted to, had the rest of my steel cut outs with a little pumpkin spice mix I made and a drizzle of maple syrup along with 2 cups of coffee and my homemade gingerbread simply syrup. Lunch had the rest of my caldo verde or portuguese green soup. Dinner I pan fried a fillet of salmon and had some of the tomato avocado salad I made yesterday on the side. 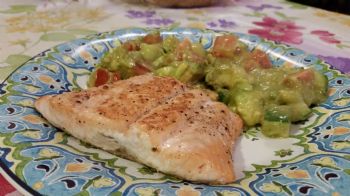 Helped Mom this morning taking the puppies to their first vet appointment.

Mom as 2 golden retrievers, that came from 2 different breeders. She wanted to breed them and back in October they had mated. What we didn't know is that Heidi never developed the muscles to push. The vet feels Heidi may have been inbred, and that some of the 7 puppies she was carrying had died a week prior to their premature delivery. The day she delivered she had to be rushed to the vet for emergency cesarean and ended up also getting spayed. Only 2 out of the 7 puppies survived, one boy and one girl. The plan was to originally sell all but 1, but we just don't feel that it's right to separate the only 2 surviving puppies from each other and from the mother.

All that being said, vet said they are doing well, healthy and at a good weight, each just a touch over 7lbs.

I did not go on my after dinner walk today because my dog is not getting along too well with the new puppies. She snapped at the girl and not sure if she bit her or not, doesn't seem so, but the girl did cry. So had to be the big momma and try to discipline her and let her know that behavior is not ok and will not be tolerated. Sometimes I wish the dogs and I were on the same length of verbal communication and understanding. I did just get in an exercise routine via youtube, it was short but did elevate my heart rate. Was good because the 3rd resolution I made for this year is to do one exercise routine a week and last week I didn't and the week before I don't think I did either.
Share This Post With Others
Report Inappropriate Blog
Member Comments About This Blog Post