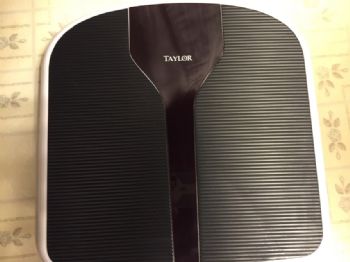 I finally bought a new bathroom scale and now I don't dread weighing myself. My old scale is ridiculous. When I stepped onto it it would take a long time to "settle" on a final number and if I didn't stay really still it would take even longer. If I stepped off and back on again I'd get a completely different weight - sometimes up to 10 pounds different than 30 seconds ago. I went on Amazon to look for a new scale and it seemed like a crap shoot. So yesterday I was at Meijer's and bought a Taylor digital scale (that takes AAA batteries instead of those lithium batteries that my old scale ate up like Scooby snacks). Just randomly said "yeah, I guess that one is as good as any". The new Taylor scale does not hem and haw trying to make up it's mind. I step on - boom- number pops up in a few seconds. I can step off and on and it shows the exact same number each time. Amazing. Now it take 5 seconds to weigh in whereas before it was 5 minutes of off and on trying to guess which was the right weight. Of course that lead to me trying to manipulate it to give me a number I liked. But the best part is the new scale says I weigh 13 pounds less than best weight I could trick the old scale into showing. It good to have a scale that isn't into being manipulated. The old scale was obviously passive/aggressive and I'm sending it to therapy so it can learn how to speak the truth.
Share This Post With Others
Report Inappropriate Blog
Member Comments About This Blog Post