Sorry about not being around a lot, there is just so much going on, again!!

My nephew was in a car accident, but thank God, he wasn't hurt. He had a seizure and slowed his car down (this is the way I understand it, I could be wrong), because he felt "strange", somehow when he had the seizure, he hit the gas and the car took off, hit the curb, went airborne, flipped twice and landed on it's wheels in a space between two semi's that was just barely wide enough for his car. (This was according to a witness who saw it happen.)

Thank goodness he was safe and not hurt, but I know for a fact that the DMV will take away his license for the seizure, for 6 months. They did me, and I wasn't even driving. (back when I was 18). But the bad part is, knowing my nephew, he'll still continue to drive, that's just how he is. He'd been having seizures before that, not a lot, but enough that they took him to the doctor and he's been tested, but they can't find what's causing them at all.

I've also been busy with the foundation and playground rebuild, and today my "duty" is to put together everything that needs to be changed on the second set of plans, and get it to the architect so we can get a final design.

We've had so much trouble getting the guy who heads the parks dept cooperating, and our Treasurer coming to meetings. This is about the 4th meeting this Treasurer has missed (not in a row) and he NEVER sends a Treasurer's report to me or lets me know he's not coming. So frustrating!!

We have a fundraiser on the 31st at Willowdale Tavern in Janesville, and 7 members made it to the meeting, only 2 signed up to work at this fundraisers. ARRRGGGHHHHH.

*deep breaths, no stress* But it'll be fine, we'll figure out something.

I hope you're all doing well and have a beautiful rest of January.

Oh, a picture from when we took our daughter, Brande, to Cozumels for her 30th birthday: 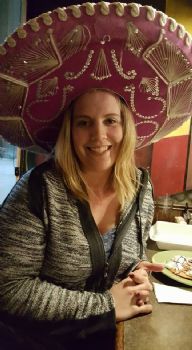