It's that time. The year comes to an end and a new one begins. We all say it's time to start again! Well, count me in the mix, but not because I have nothing better to resolve to do.

A year ago I anticipated an uneventful year ahead of me, but boy was I wrong. This past year has been huge for our family, and I'm only beginning to feel like I have a grip on life again. My husband came home one day and announced that he wanted to quit his job and move. I was shocked to say the least, but I got on board. We agreed that we would go where God directed, and do what he led us to. So we immediately started praying and looking for the next opportunity. Yet direction didn't come and it became clear that he'd traveled his career path as far as he could without a degree. So we decided it was time for me to reenter the work force, and for my husband to go back to school. We would leave our home in Idaho and head for Oregon.

We'd always talked about moving to Oregon, it seemed like the next logical step. Yet as we prepared to make it, I knew we were going to be miserable there. I was determined to Go where God led us, and without clearer direction than the "Trust your husband, let him lead you" that I'd felt whispered into my heart, I felt forced to make the decisions to enable our move under the harsh deadline my husband had set for us.

He continued to search for jobs, but I felt fairly certain about the final destination and didn't give any of them much thought. That was until they got outrageous.

"Juneau Alaska has an opening," my husband called from the couch.

"Forget it," I say irritably, "My mother is dying that we're going to Oregon, I'm not telling her we've decided to move to Alaska!"

A few days went by while I continued to pack up our home, prepare for an upcoming yard sale, and finish my remaining obligations. Once again my husband calls to me from the couch.

"That Juneau job is still available," he says. "They pay for relocation, benefits, great starting salary."

"You go to Alaska for a vacation, not to live," I quip back. "Alaska sounds like a horrible place to live!"

My friends encouraged us, my family encouraged us to reconsider, and meanwhile my husband continued to procrastinate. A week has gone by since his first Alaska comment, when my husband says, "That Juneau job is still open."

I bite my tongue as something sarcastic begs to get out. I feel God poking me, begging me to pay attention. Then that whisper I'd heard in the beginning comes back to me. "Trust your husband, he told me. Let him lead you, he said. Sure, I thought that would be easy. No wonder I needed the prep time. ALASKA?!" I ranted inside my head.

Out loud I say, "You can apply if you want to."

"No," my husband says solemnly. "You were right, that is a long ways to move."

I immediately know his doubts are there because of me, because I didn't listen as I was directed.

"Applying isn't accepting," I say carefully. "The worse that can happen is you turn down a job or they don't pick you."

But we all know where this is headed. They did pick him. And they want us there a month before our four month end game was planned for. I have six weeks left to prepare us for this move. Crazy doesn't begin to explain my life. I was too busy to fall apart, too busy to regret our choice, to busy to do anything but... well EVERYTHING! Then they week finally comes when I'm going to get help. My husband has three days left before his last day of work. We have a week to prepare for the move together, then we have to hit the road. We've paid for the UHaul, we've paid for the ferry, we've found a rental and they're holding it for us until we get there. Then my husband comes home early, and by the look on his face I can tell something is wrong.

He's fallen and hurt his ankle, he can't go back out to work. I force him to the doctor to get it checked out and guess what? It's broken. In four places... The deadline looms before us, we're racing the clock. Three days before we leave town and my husband goes into surgery. They put in a plate, forty-eight hours of being elevated. I pack the whole house with the help of my church friends. I scrub, they scrub with me. His mom and aunt jump in and volunteer to drive the UHaul since my husband is now unable. I work until it's time to pull out. There's no time left at all. I don't get to spend any last minutes with my family, they all went to cleaning. I have to say goodbye for who knows how long, exhausted and brokenhearted without ever having had time to make it seem real.

The following months are filled with moving our family by myself. Taking care of everything while my husband is unable to bear weight. Then he gets an infection... that won't clear up. Another surgery, staph infection, pain, swelling, missing work from a brand new job. To say it was stressful doesn't begin to cover it. It was a huge trial.

Now here we are, six months later, and I'm beginning to have some peace again. In the meantime I've gained weight. My scale didn't make it to Alaska, so I don't know how much, but I can feel it in my jeans. I can see it in my face.

Alaska is incredible, but I can't take advantage of so much because I'm just too fat to handle it. I've been steadily getting to the brink, and I can't handle it any longer. I have to lose weight for me. My health, my emotions, my self-esteem. So here I go again. But it's different this time, I don't have the elliptical I loved so much. I have rain, bears, and all kinds of stuff I'll have to learn how to deal with. But it's a new place, new people, new year, and hopefully very soon I'll be getting to know a whole new me. 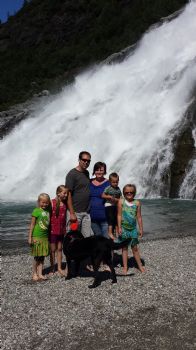