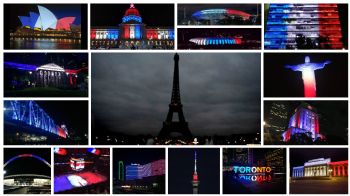 "When Paris' lights went off, the lights of the world went on..."

First of all, I am so incredibly moved and proud of Parisians, just as I was when New Yorkers were courageous and stalwart after 9/11.

If you don't know, Paris was attacked on 6 fronts last night by some terrible human beings, killing mercilessly in the name of Allah. Allah would NOT approve of them or their obscene take on his religion.

It isn't easy to be courageous when there are terrorists killing your fellow citizens, but Parisians were. The first bombs went off outside the cities' soccer stadium, the Stade de France. The gendarmes let the game continue, because they didn't want panic. When they stopped the game and sealed off some of the exits, the Parisians left en masse, but soccer fans sang the French national anthem, La Marseillaise, as they evacuated the stadium. One of the coolest things I have ever seen.

It was indicative of the night to come. More than 150 innocent people were murdered last night. They were murdered in the name of religion. A blasphemy if there ever is one. Religion should be a personal journey, not a cudgel used against others EVER to punish them for not agreeing with you. Religion needs to be taken out of public discourse here, in a land where separation of church and state is a fundamental freedom. This can NEVER change.

There is no excuse for this savagery. I suspect that we now will be going after ISIL, since they claimed the title for worst persons on earth when they announced that this attack was theirs last night, and frankly, it is about time. We cannot let savages destroy lives of innocents in our best and brightest cities. Their scourge on this world must be rooted out and destroyed.

By the way, the photo above is erroneous. Paris turns off the lights in the Eiffel Tower every single evening at one am, but it's a nice display anyway.