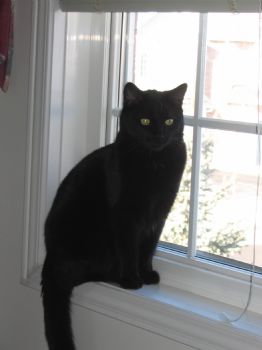 My new cat, Tucker, lived for 7 yrs at a rescue centre.

He's a 'black beauty' (see pic), and very afraid of everything,

because he had very little socialization. He was living free,

in a medium sized room with 24 other 'unfit' senior cats.

Unfit because they had given up any hope of being adopted.

This happens to the ones who will hide, hiss or are simply black.

My daughter volunteered here for a year, and was amazed

when this big, beautiful, black cat came up to me and allowed me

to pat him... twice. He even arched his back. All the girls there

said at once, "Tucker never does that". So I think he picked me.

We've had him three months now, and he sleeps in our bed,

loves to be petted, but not to be picked up. No-no-no pick him up.

His coat is like thick black velvet, and his eyes are a glowing gold.

He'd eat anything and everything "if we let him"...

including fries, pizza, and chips. This is because all he knew was

one kind of cat food. We'll give him a treat or two, and I have made

sure there's a big variety of cat food for him.

He loves to play with his toys, and play "can't catch me".

I've told all this to his former care-takers at the rescue centre,

and it reduced them all to tears... They're astonished at how well

he is doing, and so happy for their recluse cat named Tucker.

We love him. And yes, someday he will allow me to pick him up. 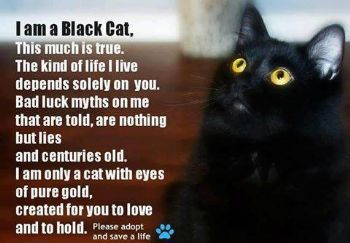