I'm not a believer, but I prayed.

The other day I started reading a book about someone who dealt with depression and addiction. In fact, you may know the person very well since he is the former guitarist from Korn: Brian Welch.

A friend told me I should read his autobiography, since I've been having a difficult time these past 2 weeks with the time change. She told me that it talks a lot about him finding God. Well, I've never been a "believer", but honestly, I'm ready for a sign. From all my blogs, you may have been able to tell that I was doing quite well. And I really was. But depression is a disease, and it will always come back for more. So I promised my friend that I would read this book which was called "Save Me from Myself."

I never thought I'd have anything in common with a former rock star. In fact, there was so much in common that I was instantly attached to that book. I read and read, and hardly put it down. In two days, I was finished with it. And honestly, there were only a few differences that we had.

The first was that he was, of course, a famous rock star with lots of money. However, that isn't part of the main discussion. Mainly our difference mentally was that he was addicted to drugs because of his depression. Honestly, I think I'm addicted to food instead, which can have just as harmful effects in the future. So perhaps we had addiction in common after all.

The second difference was that he healed himself by reaching out to God. He didn't believe at first, which is much like me. But in the end, he had found Him. The transformation he had made blew my mind, so last night I made a huge decision.

I decided to pray.

It was the first time I've ever done a sincere prayer. It felt unbelievable, like I was being filled with love. I opened up so much. The only problem was that it didn't last. Because this morning, I was depressed again.

I have to keep telling myself that just like Brian Welch, it takes time to get healed by the Lord. And for me, I haven't even had my sign yet to know that He himself is real and watching over me. Yet, I'm not giving up hope. I will continue to pray; I will continue to live life trying to get closer. Because in the end, what else do I have to lose?

I even bought myself this prayer box, which is filled with the most beautiful aqua sea glass. I'm very excited about it coming in the mail Monday. 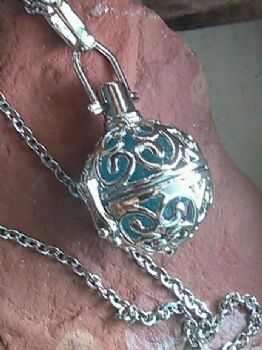 There it is, my most surprising blog of all time. I'm not yet a full believer, but I prayed with all of my heart. And to me, that was an incredible first step. And please, if you're a believer our there, pray for me. Pray for me to find my sign. Pray for me that God will help me out of this depression. What's better, I'll be praying as well.
Share This Post With Others
Report Inappropriate Blog
Member Comments About This Blog Post