I got back from New Orleans yesterday at 2 am. Since I was so exhausted from my trip, I didn't really feel like writing. Well after some serious sleep and a good meal, it's safe to say that happy Jaime is back and ready to tell you guys all about my trip! Eek!

The reason behind our trip to New Orleans was to go to a tattoo expo that was held there. Tattoos to me are like art. Zach and I both had appointments to get a tattoo, and then afterwards, we were planning on going to Bourbon street to see what the rave is all about. Well it was raining. Hard. Extremely hard.

But I didn't let that damper our mood! Instead, we spent more time at the expo. It was INCREDIBLE! Artists from around the world were there. Some have even been on television shows and magazines. They had about 50 booths in this building, and each booth had a different artist with all kinds of portfolios, paintings, and prints sprawled out. I bought so so many, but unfortunately I can't take any pictures of them because of copyright reasons. Just trust me when I say that my house is going to look magnificent after finding the right frames for them all!

So the first day was going to be a tad boring, I knew; it was Zach's day to get his tattoo. It turns out that he decided to get two tattoos at the same time by two different artists. So there he was, sprawled out on the table with one arm sticking out and a leg at the other side to get tattooed. Yeah, I couldn't watch his pain, so I walked around buying art work.

I walked past this artist who said he had a cancellation and asked if I was interested. He'd give me a really cheap price, he told me. As it turns out, I have this dragon on my side that I've been DYING to get covered up. He told me he could do it with no problem. And he was right! The tattoo is beautiful, and he kept his word about the price! What once was a trailer park dragon is now a piece of art! 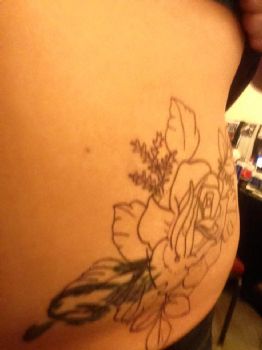 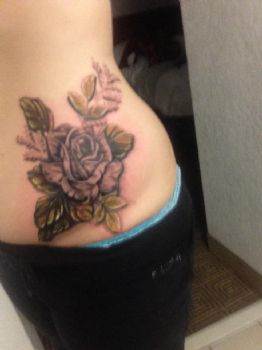 So after the 6 long hours, Zach still wasn't done. So I went walking around again. There was a piercer looking sad and lonely because of his lack of clients that day. I let him pierce me for a really good price, and I actually love it! 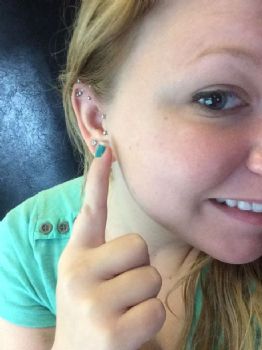 I was exhausted at this point, and Zach was finally done. So we headed back to the hotel, and got some sleep. The rain was still nice and heavy, so we didn't feel too bad that we didn't get to experience Bourbon street.

Today (Sunday) was my day for the tattoo! I'll skip the details about the next 6 hours without a break and go straight to the picture of the incredible tattoo on my shoulder blade! 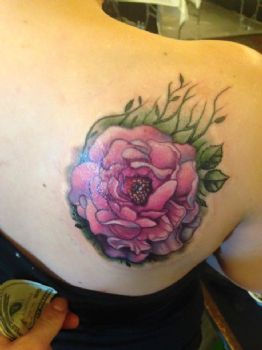 He wasn't able to get to the perching bird, but he promised me next year that he would finish it. I'm not complaining though. The flower looks like it popped right off a painting!

So as soon as my tattoo was "finished", we were ready to leave. It was 8:30pm, and we had a 6 hour drive ahead of us. That explains why I didn't blog yesterday instead! But on the way back we dropped in really quick for some good old fashioned New Orleans seafood. It was probably the best food I've ever had, so I can't say I didn't get to experience "New Orleans" at all!

There it is, my weekend at the tattoo convention! I had a blast, and I loved every minute (except for having to drive back). I hope you guys enjoyed this blog... even those that are not so fond of tattoos!
Share This Post With Others
Report Inappropriate Blog
Member Comments About This Blog Post