Me? Crazy? I should get down off this Unicorn and Slap You! 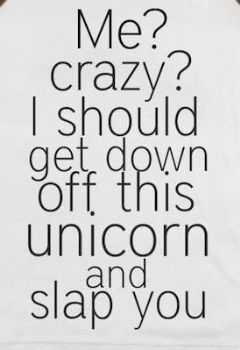 Me? Crazy? I should get down off this unicorn and slap you!

OK this has nothing to do with anything, other than the fact that I loved the quote. I was thinking about this yesterday, when my darling daughter, Mary Fran, came home from work, bearing food. She had a container with not one, not two, but three cinnamon rolls in it. The place she works makes their own cinnamon rolls, and I assume they are quite tasty. She said, Mom, I would offer you one, but I know you don't want it. I looked at her and smiled, and said, not only do I not want it, I don't want YOU to want it.

She proceeded to eat a cinnamon roll while she was talking to me. I was somewhat flabbergasted, but then I thought, well, if you are going to eat something, I am glad you do it with gusto, and like it. I told her that cinnamon rolls were useless calories (I am TRYING not to be a food preacher!!), and she said, but Mom, they are really good!...big smile...I LOVE my girl.

She's right. They probably are good, but I'm not ever going to eat one again. That kind of stuff doesn't matter to me as much as my focus and path and good health does. I'm doing too well to be done in by a cinnamon roll.

My daughter is very funny and I told her about this graphic. She thought it was as awesome as I do. She said, Mom, write about unicorns. I said, there is no such thing. She said, well, that's the point, isn't it. Yep. There is no such thing as unicorns, and there is only you preventing you from eating a free cinnamon roll that comes walking into your house.

Realize always, that healthy and fit tastes better than any cinnamon roll ever did. I went and got some grapes and ate them while my daughter finished her cinnamon roll. She said, Mom, now you are making me feel bad. Why? I asked. She said, I know I should be eating grapes with you. I said, love, you will get there, and I will be here when you do.