I put it together myself!

About a week ago, I ordered rolling storage cart with drawers from Walmart.com.

I bought it to replace the current cart I was using for all the stuff I keep next to my computer. That was just cheap 3 tiered cart with just open shelves, and gradually, it started to lean too far forward. I called it The Leaning Cart of Crap. It had wheels on it, but because it leaned so bad, I couldn't really move it without it falling apart.

Anyway, I decided it was time to replace it with something sturdier, so I bought this one. I knew when I ordered that "some assembly was required", but still, when it arrived yesterday afternoon, and I took it out of the box, the metal frame was in more pieces than I had expected it to be. It was a little daunting, but I decided to give it a try putting it together. It went together much easier than I had thought! And it didn't take long either. 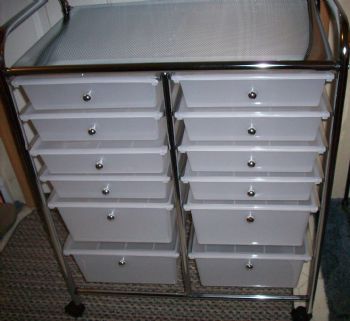 The hardest part was actually getting the plastic drawers apart. The came in the box all stacked together, and they were wedged so tightly together, it really took some work to pry them apart. That was actually harder work than assembling the frame.

There is one drawer that was broken a little in one corner during shipping, but I emailed the manufacturer about it, I am hoping they will send me a replacement drawer.

Anyway, even though it was not that complicated to put together, I still feel proud of myself for doing it on my own. And now, my current project is sorting out the mess from the old cart, and the clutter around my computer, and getting everything in order.
Share This Post With Others
Report Inappropriate Blog
Member Comments About This Blog Post