Timmy is back home!

Timmy has been home for a little over 2 hours now; at the moment, he is curled up and taking a nap.

We still don't know what caused his seizure, but he has not had anymore. He is alert and was already jumping on the bed soon after we got home. His CK level is severely elevated; that is some type of muscle enzyme and indicates he may have some of type of infection; it will take a couple of days before the emergency vet gets his full report back, but in the meantime, he is on an antibiotic in case is in fact an infection. But for now, the plan is just to watch and if he has any more seizures, I can get with my regular vet to start anti-seizure medication. He is still due for his annual shots so I will have to get him in to my regular vet soon for those.

He gets nervous during car rides, and a few minutes in the hour ride home, he had a couple of accidents in the cat carrier, poor little guy! I felt bad he had to sit in there in that, but there wasn't any way to stop and get him cleaned up without taking the chance of him getting loose, and he is an indoor only cat. But as soon as we got to my house, Penny helped me get him into the sink and we cleaned him up, though not without him protesting a little.

It did not take him long at all to get acclimated to being back home again. Kallie hissed at him, but I think it's just because she could smell the "hospital smell" on him. He ate some of his dry food, and curled up in my lap purring for a little while. I think he's pretty tired out yet though from the whole experience.

I'm praying that this seizure was just a one time thing, especially since I can't afford, or want to put him through, further testing such as ultrasounds or CT scans. Chances are, if those things found anything, it would be very expensive to treat and hard on Timmy, and there would still not be a good prognosis for him. I will just treasure each day God gives me with him, and Kallie.

Penny headed up north, back home, shortly after getting Timmy and I home, but she will be back again in 4-6 weeks.

Here is a picture of Timmy from a few months ago: 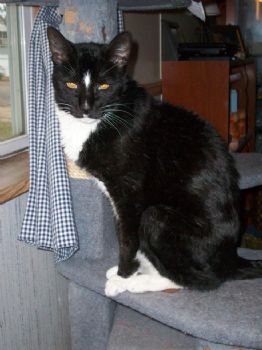