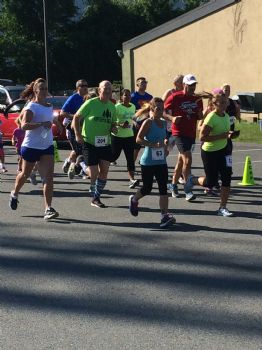 A couple of days ago, I decided that I would run the Get Steppin’ 5k Road Race on Saturday 8/8/15, which was being held in the city where I live, if the family schedule allowed. It benefits a program to get homeless people back on their feet and working again. Shortly after that, I found out that a band I used to go to listen to at clubs back in the late 70s was playing locally on Friday. I could not pass up on that. This did not turn out the best way to prepare for a race the following morning but I don’t regret and the race ended up going okay.
I went to the concert and ended up getting to bed around 1:00am. The race start was scheduled for 9:00am. Usually, I would get up around 6:15am so that I could make breakfast, shower, get ready, and be there early to register for the race. I initially woke up with a headache (I only had 2 small beers!) so I took a couple of Advil and went back to bed. When I woke up again, it was already 7:30am. I scrambled to shower, shave, and get dressed for the race. I managed to get there a little after 8:15am. I had not had time to eat so I had a little bit of watermelon once I registered and attached the bib. I did a couple of warmup runs and my legs felt pretty good but not as strong as I would have liked. I had done a 5 mile run 36 hours earlier and I could still feel that a bit. It was starting to get warm (near 80 degrees) as we approached the start time. At the last minute, I decided to ditch my Red Sox running cap and run bare headed. I figured that the race was short enough that I wouldn’t get a sunburn. The bibs had chips but it wasn’t really a chip timed race as there was no mat at the start line, so everyone’s time started when the horn went off. It took me about 4 or 5 seconds to reach the start line. I friend who wasn’t running agreed to take a few pictures. She got a good one at the start and another as I had just turned for the finish line at the end of the race.

The first 0.2 miles were flat. The road bent to the left and then had a steady incline for about 0.7 miles. I found a pace that pushed me but did not exhaust me. We crested the hill and as we start to go downhill, we hit the 1 mile mark and they were calling out 8:43. Considering the uphill, I felt that was a good mile and I had a chance to better my 5k time for the year. This downhill portion was steeper, and not as long as the uphill. We bottomed out as we took a right turn and then did another uphill portion. We crested that for a very slight downhill and hit the 2 mile mark. The time being called was 17:19, which meant my second mile was 8:46. I was still just about on the pace of my best 5k but that second and third uphills were draining my legs. We took another right and headed uphill again, it wasn’t a bad incline but I could feel my pace suffering. I had been passed by a few runners in the initial uphill and another just before the 2 mile mark. I had passed a couple in the second mile. As we were doing this final uphill, there was a runner just ahead of me that I was inching up on. I passed him just before the left turn at the top of the incline. I made a wider turn and he angled across the wide road better to pull in front again. As we started on the decline, I picked up my pace and inched by him. I maintained that slightly faster pace but could hear him right in back of me. This went on for about 0.3 miles until the right turn up and into the parking lot and the finish line was approaching. I managed to kick it into a higher gear and put enough space between us (see second picture) so that I finished ahead of him by a few seconds. 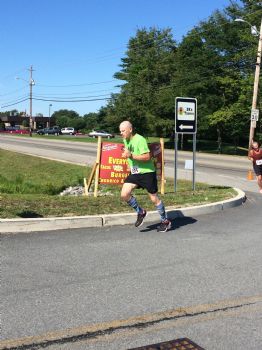 Anyway, it was a beautiful day and I got in a couple of hours of kayaking later in the afternoon. Also, my weight this morning was 192.0, so I am down 73 pounds since mid-February of this year. I need to lose maybe around 10 more pounds before I can switch to maintenance mode. The difference in how I feel and what I can do now is considerable compared to back then. I’ve just got to keep doing what I’ve been doing and I’ll get there.