A stormy evening and a beautiful rainbow

The weather made me a little bit nervous last night. We were under a severe thunderstorm watch from 4pm until 2am. It wasn't the fact that we were under a watch that made me nervous, it was looking at the weather radar and seeing what was headed for us.

We had a couple of thunderstorms move through that brought some wind, heavy rain, thunder, and lightning, and in some parts of town, hail. The first one rolled through around 7:30pm and the second one a little before 8:30pm. The skies were very dark and kind of scary looking before the first storm. The worst of it went around us, but it was close. Some the surrounding areas had warnings, and there are trees down in some areas, and at this time, some around the state do not have power yet.
We did need the rain though, and there was 4/10ths of an inch in my rain gauge this morning.

It really cooled down after that, and around 8:45pm, the sun came out while it was still raining, and it was so bright! There was also the most gorgeous rainbow, which I didn't realize at the time, was actually a double rainbow, but I only see so much of it because of the trees in my area. I took a picture of it, but until I get my computer fixed (it updated itself from Windows 8 to Windows 8.1 last week and since then, it won't recognize my camera card or anything I put in the USB port) I cannot upload it. But our local newspaper posted this photo of it on Facebook that is better than any photo I could have taken. 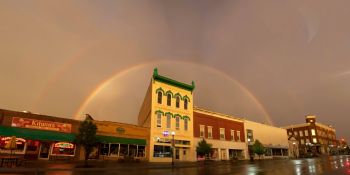 I was thankful and relieved that the storm had passed, and before 10pm, the watch for our area was cancelled. I was very thankful also, that my power did not go out, because I had been looking forward all day to watching the season finale of Poldark on Masterpiece Theater.

I had trouble getting to sleep again last night though. I had noticed over the weekend my heart rate going up again. I have a blood pressure monitor that also shows the pulse, and even after sitting for an hour, my pulse is still around 99 or 100. It often gets that way when my hemoglobin goes down. I think my heart rate last night was probably what was keeping me from relaxing enough to fall asleep even though I was not feeling stressed or anxious at the time. I had my weekly CBC done this morning, and I am still waiting for my report to show up online.

Despite feeling tired, I made it to the monthly lunch out with some of the people I use to work with. There were 8 of us this time, and a few of them I had not seen in several months, and I was very glad to see them. I enjoyed myself despite the fatigue.

I took a nap shortly after I got home. I made myself get up after an hour, even though I was tempted stay in bed, but I knew if I slept any longer, it would be too hard to sleep again tonight, and tomorrow morning, I have an appointment with my internist. I am finally starting to feel like I am getting a little bit of a "second wind" right now though.
Share This Post With Others
Report Inappropriate Blog
Member Comments About This Blog Post