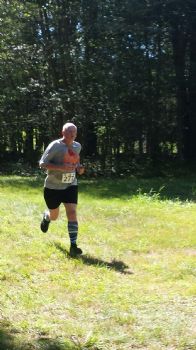 A couple of weeks ago, when I realized that I would not be running the 10 mile race I had considered, I looked for a 10k race to run as that would be longer than any race I have done so far this year. I was pleased to find the Watuppa 10k in my own backyard here in Fall River. I then realized that it was a trail run, which would make it more of a challenge since it would be a combination of the increased distance and the uneven running surface where you have to be on alert the entire time. I figured, what the heck, and signed up for it.

The week, I wanted to make sure I got in a good training run. Ideally, Wednesday would have been the optimal choice but I had to go to my daughter who is interning in Lowell and did not get back until after 11:00pm. Thursday did work out and I put in a good 7.5 mile run in the early morning. Knowing the distance was over a mile more than the upcoming race gave me just a bit more confidence.

I came across my pair of trail running shoes that I had bought early in the year. When I had tried them on back then, they seemed too tight for my feet and I gave them to my daughter but they were too big for her. I tried them on Friday after work and they fit perfectly. I guess my feet shrunk during the weight loss too. I put them on and decide to do an easy 3.7 mile run that evening to see if they would be comfortable enough for the race. They worked fine, so I decided to use them instead of my regular running shoes.

I gave myself Saturday off from running and did a good 2 hours and 20 minutes of kayaking to burn off a good chunk of calories. I allowed myself most of a small pizza (free courtesy of Papa Gino’s because it is my birthday month) as my version of carbo loading for the race. This brought me over my normal calorie range but I still ran a more than 2000 calorie deficit thanks to the kayaking.

During Saturday, I receive a couple of information emails about the race. The starting time was set for 9:00am with the registration tents opening at 7:30am. The bad news is that there was going to be only one port-a-potty there. The turnout was greater than last year, so they tried to get a second one but their supplier was fully booked. It was then that I decided that I was not going to get there too early and that I would hydrate a bit less than I had originally intended. The good news was that the forecast was for the temps to drop to about 60 degrees overnight, so even though it would be heating up at the start of the race, the temps should only be in the mid-70’s at the start.

The day of the race, I got up fairly early knowing that I had plenty of time since I did not intend to get there before 8:00am. I had a bowl of oatmeal with cinnamon and a bit of sugar for breakfast. I had some water early. Time went by a bit quicker than I realized, so, as usual, I was scrambling to get out of the house. I made sure I used the facilities at home before heading out. The race site was only about 12 minutes away and I had no trouble finding it. What I hadn’t expected was that I had to park about a quarter of a mile from the registration area as there are no parking lots near this protected watershed area. I used that to get in a warmup run from my car to the tent, where I got my bib and shirt, and then warmed up again back to my car. I put the bib on and the shirt in the car and headed back to the tent area. I went right into the potty line to make sure I got to go at least once before the start of the race. I ran into a niece once removed (Karen) who was with her boyfriend who was running the race. (He is also running the NYC Marathon this year, so, yes, he is a much better running than me.) It was good to see a familiar face. I finished the potty line with about 12 minutes to go before the start time. I warmed up a bit more and then settled in to wait for the race instructions. The director stretched out the instructions to make sure that the potty line had fully cleared out. That delayed the race by about 10 minutes. I ended up in mid-pack by default for the start of the race. It was chip timed, so time to the starting line was not an issue.

The starting horn sounded and I crossed the starting line about 5 seconds later. The path was wide for the first 50 yards but then things started narrowing down. It was all I could do to watch the other runners and the rocks and ruts on the ground at the same time. In just over a tenth of a mile, we entered the woods and were on essentially a single file path. The pace was okay, though I was concerned about going too fast during the first part of the race and having nothing left after 3 or 4 miles. I few of the faster runners that had been farther back in the pack did manage to pick their way through in the narrow space. I was happy to let them sneak by. Once we hit the ½ mile mark, I noticed that this portion of the trail was mostly uphill. Things widened out a little bit but things were rockier and there was some standing water to avoid along with the roots. Through all of this, I managed to miss the 1 mile marker. We then hit a fire road, so it widened out a bit more. Essentially, there were two ruts with overgrown grass higher up in between them. Still we continued mostly uphill. I was passed by a few more of the faster runners. When we hit the 2 mile mark, I checked my watch (which I had started when I crossed the starting line, amazingly enough) and saw that it said 19:24 (a 9:42/mile pace). Since my goal was to finish the 10k (6.2 miles) in under an hour, that was not quite going to do it. With my brain kept busy just keeping my body upright and not missing any turns, I decided not to figure out my pace on the succeeding miles but just try to get my time so that it was more than 2 minutes less than the mile marker times 10 minutes. At the 3 mile mark, my time was about 28:40, which means that I only had to run a bit more than 40 seconds under a 10 minute pace to break an hour. Right at this point, another runner asked me if I needed any water, knowing that the water stop was at the 3.5 mile point, I thanked him but declined. An aside, I found that the trail runners were a much more laid back group than road runners. There was more joking and everyone was friendly and helpful. They seem to be a more tight knit group that tends to travel further for these types of races. The offer of water to me was just one example of that.

The water stop at the 3.5 mile mark is setup immediately after a sharp lefthand turn in the trail. It is in a wide spot. Unlike most races, you have to grab them off the table, instead of having someone hand it to you. I grabbed the first cup I could reach and was surprised to see that it contained Gatorade. It wasn’t until I had the cup in my hand and was nearly past the table that someone pointed out that there was water in the second group of cup. At water stops, I usually take a gulp of water, missing my mouth with some of it, and dump the remainder in my cap if I am wearing one (which I did not today since we would be in shade a fair amount of the time) or dumping it over my head if I wasn’t wearing one. I got a bit of Gatorade in my mouth but decided against dumping it over my head for obvious reasons. The water stop could have worked out better for me. At this time in the race, the uphill and downhill were about even. There wasn’t as much flat as I would have liked but the course is the course. I hit the 4 mile mark at 38:10 so I was almost where I needed to be to break an hour. It was at this point that my heels started hurting a bit. This may have been the result of how I was landing on the uneven surface and rocks. I will have to work on my form a bit. The next mile had more downhill but that was getting dicey as my legs were tiring and I had a bit more trouble getting them to land in the right spot on these downhill areas that were full of small and a few large rocks. I made it to mile 5 at 47:28, so things were looking good. My leg control was getting iffy during the final full mile and just before I reached the 6 mile marker, a root jumped up and grabbed my foot. This sent me falling forward. I did manage to recover quickly by executing a non-too-graceful forward roll and jumping to my feet. I checked to see if anyone saw me fall but it was just me, the deer, and the coyotes. I came out of the woods hoping to speed up a bit but was directed into a very narrow, twisting, rock filled trail for about a tenth of a mile. It wasn’t until I broke into the clearing and took a hard left turn that I was able to make a push for the finish line about a 100 yards away. The clock time showed 58:50 when I crossed the finish line. My chip time ended up being 58:45 for a 9:28/mile pace. I was 55 out of 105. Everything considered, I am pretty happy with that.

I hung around for a while, then headed out for the rest of my breakfast. In the afternoon, I went kayaking on the lake. I intended to do about 90 minutes but ended up kayaking for 2 hours and 10 minutes. I had a hamburger for a mid-afternoon lunch and the indulged in a chocolate almond ice cream cone with no guilt at all.