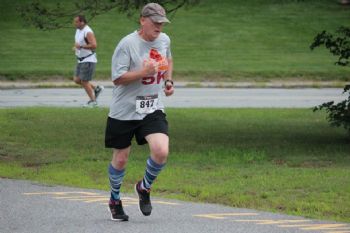 It wasn’t until late last night that I decided to run this (Colleen Celia Memorial 5K) this morning at 7:30am. A Facebook friend had mentioned it a couple of weeks ago but I had completely forgotten about it and had not registered. I saw her mention that she was doing the race and she got me the specific info on it. It is to raise money to help support the family (husband with 4 kids) left behind when she died as a result of childbirth complications in January 2014. I decided to run the 5k even though I had done a 5 mile run that evening. I wasn’t going to worry about the time.
The race was in a town (Middleborough, MA) that is about 35 minutes from where I live. I got up around 5:30am (after getting to bed around midnight), showered, dressed, did a couple of household things and hit the road. I didn’t have time for my normal bowl of oatmeal but instead ate part of a protein bar and had some water. It was held at an Elementary school and parking was no issue. I got there around 6:50am, registered, and did my warmup run. About 15 minutes before the start, I ran into my friend and we talked a bit while waiting for the pre-race info and start of the race. The start was fairly sudden and runners had not really gotten settled into positions at the start line. This was not a chip timed race but it only took me a couple of seconds to cross the starting line. I had decided to run this one like I did my 4.8 miler last week by starting at a good but controlled pace and not letting myself get burned out quickly. The first 3/10 of a mile was slightly uphill for the most part but nothing really noticeable. We then took a turn and headed down a hill for a couple of tenths of a mile at a noticeable grade. I hate seeing those because you know you have to come back up at some point. The payback and more did not take long to come. Shortly after reaching the bottom, there were back to back uphills that covered at least 4/10 mile. The marker for the first mile was at the top. I checked my watch and it was 9:04. My only real goal was to finish in under a 9 minute pace, so I wasn’t too far off. The second mile was offsetting uphill and downhill stretches. There was a water stop at the 1.5 mile mark and I just had them dump the water into my running cap to keep my head cool. I hit the 2 mile mark at 17:46, so I had moved below the 9 minute pace. During these first two miles, I had been passed by a couple of runners and had passed maybe 3 or 4. The third mile was basically a reversal of the most of the first mile and a tenth of the second one. My legs were feeling the run from the previous night but we did have that longish downhill portion that we had gone up earlier. Unfortunately, that was followed by the steeper, though shorter, uphill. I had passed another couple of runners during this stretch and held my position during the uphill. The 3 mile marker seemed to take a long time to arrive. When it did appear before the next to last turn to the finish line, my watch showed 27:04, putting me back over a 9 minute pace. Even though my legs had been tiring, this did not make sense as there had been a fair amount of downhill and I had picked up the pack a bit during the previous 2 tenths of a mile. I made that turn, increased my speed a bit more, and then turned into the elementary school driveway into the finish line. The time on the clock showed 27:41 which ended up putting me back under 9 minutes. My friend finished a few minutes later. She used the May My Run app for this race and she said that it measured the distance at over 3.2 miles. In the end, it doesn’t really matter. I did well enough and contributed to a good cause. The only problem with a 5K is that it isn’t long enough to burn a lot of calories. I ended up going to the lake a bit later in the day and went kayaking for almost an hour and a half. It was windy and the water choppy, so I got in a really good workout.