I bought a bicycle a couple months ago, it took me a while to purchase on because where I live my roads are gravel (very sandy) or a highway. Then I discovered the highway is part of a bicycle route and so non motorized vehicles are allowed. There is a nice wide shoulder so despite the traffic, it was an easy ride.

About 9 miles up the highway is the bike trail that goes through a State Park, my goal was to make it to that bike trail. There was a storm the other day and on the trail I was able to see some of the damage. Lots of trees were snapped in half, some were uprooted. There was even a spot where trees on one side of the trail were bent one way and on the other side the trees were bent the other way. It must have been where the wind swirled. The 5 miles I rode on the trail was still littered with leaves and broken branches. Just goes to show that we really need to respect the weather and heed the warnings if they are given.

But I still found beauty on the trail. There were some wild flowers that were untouched by the storm and best of all, as I was leaving the park, I was able to stand about 50 feet from a young buck and watch him eat the leaves off a small tree for about 5 minutes. He disappeared when a couple of trucks drove down the road. 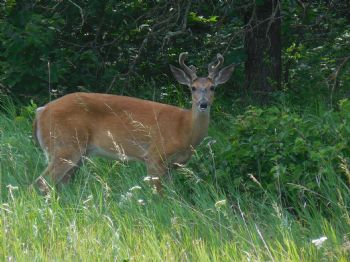 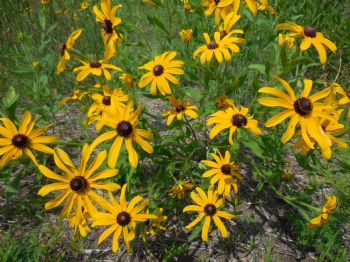