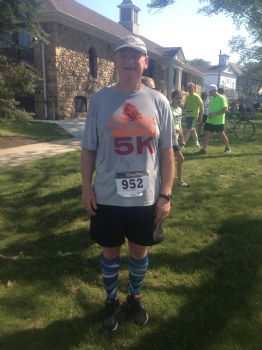 LITTLE COMPTON 4.8 MILE ROAD RACE 7/11/15
I decided early this week that, family schedule allowing, I would be running the Little Compton 35th Annual 4.8 Mile Road Race on Saturday, July 11th. This is the one race that I ran during my two previous running “years” of 1991 (how long ago was that!) and 2009. Running it this year would link the three years together. This time I am planning on keeping my running career going long past the end of this year.

I had done a 5k last weekend along with some extensive kayaking. I had hoped to do a medium/long run on Wednesday but between my schedule and the weather, that did not work out. On Thursday evening, I made sure I got in a much needed run. I originally planned to do 5 miles knowing that I had the race on Saturday morning. As I was running, I was feeling pretty good and also realized that I needed to burn some extra calories due to some extra snacking I had done. I was running my small 1.24 mile loop and decided that I would add a 5th loop to make it 6.2 miles and then do a brisk walk of the loop one more time to burn off a few more calories. The run seemed like my normal one and when I was within about a half mile of the finish, I kicked my pace up a couple of notches because I still had the energy to. When I finished my run portion, I checked my watch and it showed 1:00:30 for the 6.2 miles which made it a 9:45/mile pace. None of my previous training runs had been this fast. This was both good and bad. It was good that my standard pace was improving but bad that I had done a harder fairly long run than planned just 36 hours before a 4.8 mile race. I really felt it in my legs on Friday, so I restricted my exercise to my lunchtime walk. I went to bed at a reasonable hour but had a couple of episodes where my calf cramped up on me. I made sure I drank plenty of water but this seemed to be a bit of an aftereffect of the run.

My plan for race morning was to get up around 6am to give me plenty of time to get ready, eat, and be at the race to register at least an hour before the race start time of 9:00am. I got up late, of course, got ready after showering to help warm up the leg muscles, grabbed some bottles of water, and headed out the door, already about 15 minutes behind schedule. I had planned to have a slice of toast and piece of banana for breakfast but forgot about it until I was already on the highway. I figured that the extra stuff I ate last night would at least partially make up for it. Then, instead of using my GPS, I just assumed that I knew where I was going and finally realized that I was mistaken. I put on my GPS and I had an extra 8 minutes of drive left. I finally got there and luckily parking was not an issue as they have several fields setup for parking as the race is just the beginning of a two day faire there. I found the registration area and saw a major line for the race day registrations. I went to the table with the applications and there weren’t enough pens for all the people filling them out so I had to wait on that and then wait in the line. Luckily, it moved along pretty well and I had my bib and shirt with about 25 minutes left before the race. I hit the port-a-john and got in a short warmup run after dropping off my stuff at my car. With 10 minutes to go before the start time, I got back in the port-a-john line, which had gotten much longer. I ended up finishing up right on time. They delayed the start for a couple of minutes until the line cleared.

I took a spot more than half the way back in the pack. During the warmup run, I could feel some soreness in my legs. I had decided anyway that I was NOT going out fast like I did in the most recent 5k. That was a tough race as I had gone out fast and felt drained before I even hit the ½ mile mark. For this race, I was going to find a sustainable pace and hold it as best I could and see if I could push it a bit at the end. The gun went off and it took a few seconds for us to move at all. It took 11 seconds for me to reach the starting line. Luckily, this was the first time this race was chip timed. (Apparently, there were some major problems last year with the results.) I knew my time would be start line to finish line. The pace of the pack was pretty slow to start off and I did not get to the pace I wanted until somewhere between the ¼ and 1/3 mile mark. I actually ended up passing a good number of runners during this first mile but had to pick my way through some openings in order to do that. I hit the one mile mark as the person calling out the time had just passed 9 minutes. That meant that the first mile was actually around 8:50 or so. Like the first mile, the second mile was flat or a bit downhill. I passed a few more runners and got passed by one or two as I cruised along during this mile at a nice pace that pushed me but did not completely stress my legs and lungs. The clock time at the second mile was about 17:50, so that meant a second mile around the 8:50 pace. The third mile had more uphill to it and I was beginning to feel the heat a bit. The temperature was around 80 degrees at the start of the race and there were few clouds in the sky. They had water stops at the 1 ½, 2 ½, & 3 ½ mile marks. I took a cup at the first two, drinking a bit and pouring the rest in my cap to cool my head. Near the 3 mile mark, someone had setup a sprinkler that shot partially into the road. I gratefully ran through it. The time at the 3 mile mark was just about 27 minutes on the nose, so the third mile had been a bit slower. I had to fight to keep my pace up a few times but I still ended up passing more runners and only got passed by one. The 4th mile was mostly flat with just bit of incline and decline. I bypassed the last water stop and my actual time was about 36:20 at that point, as I had crept over a 9 minute pace. Knowing I had less than a mile to go, I picked up my pace. This was fairly easy to do for the first 0.2 miles as it was slightly downhill. Unfortunately, much of the remaining 0.6 miles was uphill. Still, I did my best to keep my faster pace going and passed 4 or 5 additional runners. I got it one gear higher for the final 100 yards for a strong finish. My chip time ended up being 43:03 for an 8:58/mile pace for the race. (Clock time was 43:13) I was very happy with the time and with the way I ran the race. They had plenty of fruit, water, and other goodies for the runners at the end of the race. I ended up finishing 180 out of 431 according to the posted times. There were a lot of good runners there.

Next on the agenda may be a 10 mile race in two weeks. It isn’t definite but I would like to do it.