Are you sitting down? Good. Because I'm going to tell you some news that rocked my world.

I am pregnant. With triplets. Holy ca-moly.

I had an ultrasound done at 9 weeks, and it was awesome to see their little arms and legs moving around this time! They were definitely looking much more like little people than the ultrasound I had at 6 1/2 weeks.

So this may help make some connections for you. Like how food was so delicious to me while I was supposed to be having morning sickness. And how I lost 2 lbs despite eating maintenance calories. And how I felt the effects of pregnancy before I was even able to take the pregnancy test. All of this was the result of having three times the babies and three times the hormones of a singleton pregnancy.

To be honest with you, I did not take this as good news at first. My first thought was that they weren't all going to survive, or if they did, they would be horribly deformed. I've heard so many sad stories of multiples, and I'm not sure I'd ever heard of anyone carrying triplets who all grew up healthily. And I felt guilty for creating too many at once because of the drugs I had to take. So I cried my eyes out right in the doctor's office.

This also totally changed my idea of how this whole thing would go because I really wanted to use a midwife and have a natural birth. And of course that can't happen with a high-risk pregnancy. In fact, the vast majority of triplets are born via C-section. And now my pregnancy was going to be much shorter than I expected, so there would be less time to get ready. And woah! Three? That's going to be so much work, almost impossible!

I tell ya what, though, I don't know that I've ever been more grateful to have married the man that I did in those couple of days after we found out. He was obviously quite shocked, too, but man...he was a rock. He was so loving and supportive and kept his mind open. I spent a lot of time crying and telling him all the things that were swirling around in my head, and he just patiently listened to it all and told me his thoughts, as well.

Eventually, I did some research online about carrying triplets and found TONS of stories of people who ended up with healthy triplets, who said they loved having them and wouldn't trade the experience for the world. I even found a group in the area of parents who have multiples. And we thankfully have very supportive families on both sides. So now both of us are very excited. It's scary, but it's the cards we were dealt, and I know that my husband and I can do this.

The biggest challenge of all of this has been food. I asked both my fertility doctor and the high-risk OB/GYN how much I should be eating, and neither of them really had a solid answer. Basically, the fertility doctor said not to worry about it at all, and the high-risk OB said to just "be more generous with myself." So I was eating about 500 calories over maintenance, and I gained back the weight I lost plus a pound in a few weeks.

I found out about this book "When You're Expecting Twins, Triplets, or Quads" by Dr. Barbara Luke that is supposed to be the highest authority on carrying multiples, so I ordered it. When I got it, I flipped immediately to the diet chapter and found out that the author suggests moms of triplets should eat 4000 calories a day in the first 20 weeks. 4000! That's almost twice what I was eating before. But she made the point that my pregnancy will be much shorter (average for triplets is 32 weeks instead of 40), and I will need to gain more weight (58-78 lbs instead of 25-35). When I hit 20 weeks, I probably will be too uncomfortable to eat that much, so I'm also sort of saving up for that time in my pregnancy.

So, I've been doing that the past couple of days, and it's going pretty well. That first day, I felt so energetic, I think my body was thanking me for finally feeding it the energy it needed. It is hard, though, because I decided that I'd try to eat three meals of at least 800 calories and three mini-meals of 500 calories. And these are spread out no more than 2-3 hours apart, as is recommended in the book. I have seriously never been one to turn my nose up at food, but there have been times when I'm making my next meal and I'm like "Uggggggh, more food." And, of course, I'm re-training myself as far as what is acceptable. But all of this will be completely worth it when I see those three faces and know that I nourished them to the best of my ability. And if I have a few pounds to work off afterwards, so be it.

I am incredibly glad that I know how to eat healthily though. Because, of course, just because I'm eating double the calories does not mean I am suddenly cleared for eating Oreos and ice cream for every meal. I still need to get in a ton of vitamins, and in fact Dr. Luke recommends eating 7 servings of vegetables and 7 servings of fruit daily. The funny thing is, she says that my diet should consist of 50-55% carbs, 30% fat, and 20-25% protein. Sound familiar? That's what I've been doing all along! So that's pretty awesome. And once again, I'm grateful for my ability to track all of this on SP and know that I'm getting a good balance of everything.

In other news, my belly got HUGE this week. The cleaners came to the house I work at and asked me if I'm pregnant, so it seems that I was already past the "Is she fat, or pregs?" phase at 10 1/2 weeks, lol. Here's me this past Monday, although I actually think I've gotten bigger even since then. 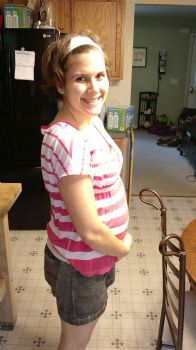 My husband and I are also seriously looking at houses and hoping to find time soon to declutter our current house to sell. We already were thinking that we would want to move this summer anyway, but this has lit a fire under us a little bit because I would like to move while I still have energy to do things and am not on bedrest. And now when he shows me houses that are a bit on the larger side, I'm good with it! Before I was like, "Ehhh, I don't want a bigger house. Too much to maintain and clean." But now that our family is going to grow quite suddenly, I'm a bit more open to some more space, haha.

And yeah, neither of us have had any need for a big car, so now we need a new one of those, too. I think the house purchase will come first, though.

So yeah! Crazy and exciting stuff! I'm so excited to finally tell you! I'll be telling the rest of the world after June 5th, which is my next ultrasound. It'll be one final check that everything is going well before we tell everyone. In the meantime, I'm just trying to enjoy this time of having my babies with me 24/7 and trying not to broadcast it when I'm with people who don't know yet. Hard to do because this is big news to keep secret!