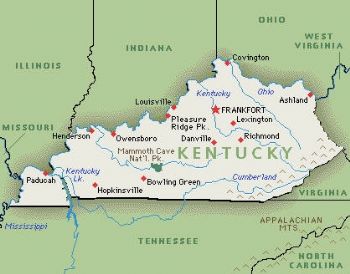 1792 - Kentucky was the first state on the western frontier to join the Union .


1816 - (first promoted) Mammoth Cave , with 336+ miles of mapped passages, is the world's longest cave. It is 379 feet deep and contains at least 5 levels of passages. It's second only to Niagara Falls as the most popular tourist attraction in the US . It became a National Park on July 1, 1941.

1856 - The first enamel bathtub was made in Louisville .

1883 - The first electric light bulb was shown in Louisville . Thomas Alva Edison introduced his invention to crowds at the Southern Exposition.

1887 - Mother's Day was first observed in Henderson by teacher Mary S. Wilson. It became a national holiday in 1916.

1893 - 'Happy Birthday to You', probably the most sung song in the world,
was written by two Louisville sisters - Mildred and Patricia Hill.

1896 - The first (known) set of all male quintuplets was born in Paducah .

1934 - Cheeseburgers were first tasted at Kaelin's Restaurant in Louisville .

1937 - The first Wigwam Village Motel, with units in the shape of a 'teepee', was built by Frank A. Redford in Cave City .

The world's largest baseball bat, a full one hundred twenty (120) feet tall
and weighing 68,000 pounds, can be seen at the Louisville Slugger Museum in Louisville (Jefferson Co.).

Chevrolet Corvettes are manufactured only in Bowling Green .

Covington (St. Mary's Cathedral-Basilica of the Assumption) is home
to the world's largest hand blown stained glass window in existence.
It measures an astounding 24 feet by 67 feet and contains 117 different figures.

Fort Knox holds more than $6 billion worth of gold - the largest amount stored anywhere in the world.

The JIF plant in Lexington is the world's largest peanut butter producing facility.

Kentucky has more resort parks than any other state in the nation.

Middlesboro is the only United States city built inside a meteor crater.

Newport is home to The World Peace Bell, the world's largest free-swinging bell.

Pike County is the world's largest producer of coal.

Pikeville annually leads the nation (per capita) in consumption of Pepsi-Cola.

Post-It Notes are made exclusively in Cynthiana , Ky.

Shaker Village ( Pleasant Hill ) is the largest historic community of its kind in the United States .

Christian County is 'wet', while Bourbon County is 'dry'.
('wet 'sells liquor; 'dry' does not)

Barren County has the most fertile land in the state.

Lake Cumberland has more miles of shoreline than the state of Florida ..

Kentucky is best known for its beautiful blue grass. And, let us not forget about the basketball and the Race Horses !!

And then there more interesting things about this state..............For example, below are some 'rules for rural Kentucky '.

THE RULES OF RURAL Kentucky
ARE AS FOLLOWS:

1. Pull your droopy pants up. You look like an idiot.

3. Let's get this straight; it's called a 'dirt road.' I drive a pickup truck because I want to. No matter how slow you drive, you're going to get dust on your Lexus. Drive it or get out of the way.

4. They are cattle. They're live steaks. That's why they smell funny to you. But they smell like money to us. Get over it. Don't like it? Rt. 80 goes east and west, I-75 goes north and south. Pick one.

6. So every person in Southern Kentucky waves. It's called being friendly. Try to understand the concept.

7. If that cell phone rings while an 8-point buck and 3 does are coming in, we WILL shoot it out of your hand. You better hope you don't have it up to your ear at the time.

9. The 'Opener' refers to the first day of deer season. It's a religious holiday held the closest Saturday to the first of November.

10. We open doors for women. That is applied to all women, regardless of age.

11. No, there's no 'vegetarian special' on the menu. Order steak.
Or you can order the Chef's Salad and pick off the 2 pounds of ham & turkey.

12. When we fill out a table, there are three main dishes: meats, vegetables, and breads. We use three spices: salt, pepper, and ketchup.
Oh, yeah....We don't care what you folks in Cincinnati call that stuff you eat...IT AIN'T REAL CHILI!!

13. You bring 'coke' into my house, it better be brown, wet and served over ice.

14. You bring 'Mary Jane' into my house, she better be cute, know how to shoot, drive a truck, and have long hair.

15. College and High School Football is as important here as the Lakers and the Knicks, and a dang site more fun to watch.

16. Yeah, we have golf courses. But don't hit the water hazards- - it spooks the fish.

17. Colleges? We have them all over. We have State Universities , Community Colleges, and Vo-techs. They come outta there with an education plus a love for God and country, and they still wave at everybody when they come for the holidays.

18. We have a whole ton of folks in the Army, Navy, Air Force, and Marines. So don't mess with us. If you do, you will get whipped by the best.

19. Turn down that blasted car stereo! That thumpity-thump crap ain't music, anyway. We don't want to hear it anymore than we want to see your boxers. Refer back to #1.

20. 4 inches isn't a blizzard - it's a flurry. Drive like you got some sense in it, and DON'T take all our bread, milk, and bleach from the grocery stores. This ain't Alaska , worst case you may have to live a whole day without croissants. The pickups with snow blades will have you out the next day.