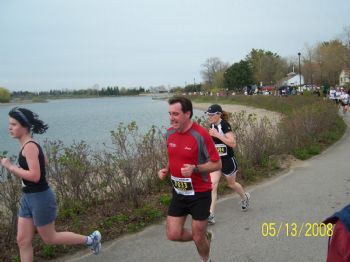 Yesterday I ran in the Mississauga Half Marathon. What a great race! My husband and daughter both came with me and we stayed in a hotel the night before. Saturday we picked up my race kit, found the start line and then enjoyed a nice dinner and swimming in the hotel pool. I didn't get a great night's sleep at all since my daughter was up for about 2 hours in the night. She's not a great sleeper to begin with, but it must have been the strange bed and the fact that she skipped her nap that day. So, the alarm clock went off way too early. We started driving to the start line and traffic was moving so slow since a lot of people were trying to get to the race and the others didn't know about road closures and were trying to find a detour. I was starting to get really nervous about not getting there on time. I saw other runners getting out of cars and starting to walk as it became apparent that things probably weren't going to be speeding up. Finally with only 15 minutes left until the start time I jumped out and joined the other runners who were running to the start line. It was probably a little over a mile to the race and I made it there with only 5 minutes to spare. Talk about cutting it close, but it was a great warm up.

This was the largest race I've been to yet and when the gun went off we didn't even move. It was so congested as everyone started to move across the start line and it took me 4 minutes to even get there. It was a great day for running, sunny, but cool since it was only 7:30 a.m. I found a comfortable pace and felt good, but panicked when the clock at the 5K mark said 29:18. It took me a few seconds to realize that I had to subtract what it took me to cross the start line and after that I just started paying attention to the time on my Garmin. I brought my mp3 player, but didn't use it at all and I really enjoyed just being inside my head and focusing on the race. The crowd support was great and our first names were on our bibs (a first for me) and it was nice to hear people calling out your name as opposed to a bib number when cheering you on. At around 10 miles my shoe lace came undone, but I didn't want to stop because I really wanted to make my goal. I told myself I should be happy with a time of 2 hours since I hadn't trained properly and had only gotten off the treadmill and back outside running a month ago. But secretly I was hoping to beat the time of my last half and knew I wouldn't be happy with myself if I didn't. I finally decided it was too dangerous to finish the race with my shoe lace undone and stopped and tied it. The last two miles of the race were on a winding trail down by Lake Ontario. It was beautiful scenery, but very windy and the trail was narrow which made passing people harder. The crowds along the path were huge and as I came around a corner I could hear my husband cheering me on which made me run faster. I finished strong and was so happy to see that I had met my goal with a time of 1:53:09!! After the race I even had time to go back to the hotel and soak in the hot tub for awhile before check out. Then on the way home we stopped at the Toronto Zoo where I spent three hours walking around. It was a fantastic trip and a great race and hopefully I can do it again next year.
Share This Post With Others
Report Inappropriate Blog
Member Comments About This Blog Post